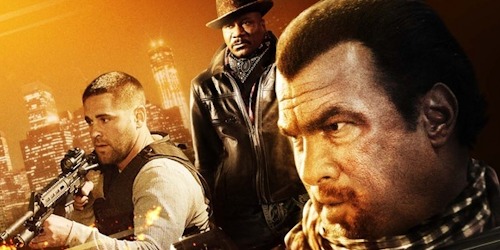 Steven Seagal looks like a giant unearthly sow, with a peculiar roasted orange skin tone.  I wonder if these are the observations that were running through Ving Rhames’ mind when he was visibly trying to hold back laughter during one scene in this movie (which was supposed to be serious) where the Seagull was speaking in slurred ebonics at him. Generally you watch Seagal movies these days with the intention of laughing at them and taking them as comedies.  Some of them though are so bad that you can’t even laugh at them.  Force Of Execution falls into that latter category.  It’s fucking shit, man.  And a real test of the endurance of anyone watching it – running in at a torturous 98 minutes.  Who buys these movies?  The fact that they keep getting made means that someone, somewhere is buying them.  Weird.

If you’re still reading this review – it is a 2010’s Seagal movie after all, it’s time for a confession.  I couldn’t tell you what the fuck this movie is about.  That’s not because it was too complicated and challenging for my brain to decipher.  It’s down to some seriously putrid screen writing.  I’m sure I could’ve worked out the intention, but boredom was also working against me.  I think it was something to do with Seagal and Rhames acting as two mob bosses going against each other?  I don’t know!  It was painful.  Since we know that Seagal often changes the actual screen play on a movie on the fly, I think that could very well be a contributing reason to this total, utter mess.  Earlier this year, when prompted in an interview, Seagal couldn’t even remember the name of this movie!  Seagal doesn’t care, so neither should you.

This movie is a showcase for doubles.  Stunt doubles for stuff Seagal and other actors (not Foster) can’t do on camera.  Body doubles for scenes where Seagal isn’t available to stand around (couldn’t they at least get a double equally as fat?).  Voice over doubles to re-dub dialogue that Seagal didn’t finish or was originally found to be incoherent – Seagal mumbles like a total drunk throughout the movie, something I think was what made Rhames look visibly amused as mentioned above.  I’m going to give this movie a 4/10, and all four points are earned by Bren Foster. A superb action martial artist, he carries this truckload of shit movie on his back.  The only scene worth mentioning is his destruction of prison inmates and prison guards in a nice opening fight scene.  Instead of buying this movie or even wasting your time watching it when it appears on TV, do yourself a favour and wait until that scene appears on YouTube.

In one scene, Steven Seagal is visibly looking down and reading from the script.  This really is a new low for hack DTVs.  Drowsy, incoherent ugly garbage.