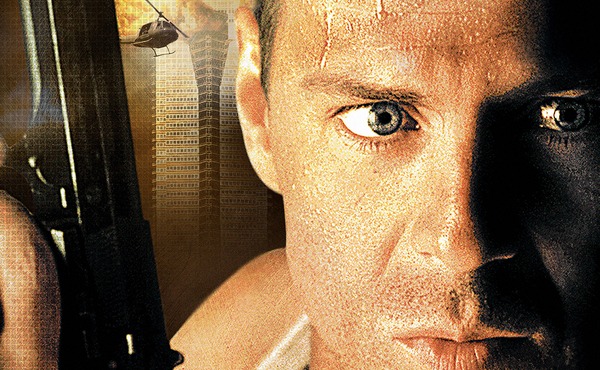 In the DVD commentary for this movie, one of the producers takes pleasure in the fact that when it was released, film snobs and critics secretly adored Die Hard and had to concede that an action movie was blowing everything else off the fucking screen, regardless of genre.  When a film sends Rambo or The Terminator franchises running with their tails between their legs, you gotta sit up and take notice.  By action cinema standards, even the 5+ Die Hard Clones that were spawned in the following decade were good movies and forces to be reckoned with (Under Siege, Passenger 57, Sudden Death).  Even as inferior ripoffs they were box office gold and highly entertaining.  And Die Hard was the original.   This is the the King Shit of all action.

Die Hard certainly shook things up more than a little bit.  Just before it was released, Schwarzenegger and Stallone were approaching near genocidal levels of pissant killing in each new movie.  The thinking of the time was the higher the pissant bodycount, the better the man doing piling it.  Yet here was a movie with a relatively low bodycount.  Each kill McLane makes is eventful, hard earned and has consequences.  All of a sudden a movie had the balls to say less was more.  In fact you could probably even sit and recite the names of the villains McClane kills.  This is just one of the differences in Die Hard, it dares to push the envelope while mastering the art of restraint.  This is a threshold it balances perfectly throughout, even while nailing dry humor and salty wisecracks.

The action itself in Die Hard is handled by nothing less than a genius.  In staging action, John McTiernan is probably rivalled only by James Cameron.  With the exception of The Terminator, I don’t think I’ve ever seen a movie with such perfectly timed pacing, editing and camera work/angles.  Each shot stays long enough to leave an impression, yet never lingers longer than it should.  No hyper edited bullshit here.  Here’s a movie that can jump from a sitcom situation on the first floor to a pulse hammering shoot out on another floor, back and forth within the space of seconds.  Lethal Weapon managed this kind of inter-action brillance quite a bit, but over the course of four full movies. But Die Hard does it every two minutes.  All of this is done in a simple skyscraper.  A fucking building. McTiernan has nothing to work with but a man, his enemies and some simple rooms.  There are no jetskis, no chase scenes and certainly no CGI super heroes flying through the sky.  McTiernan is the fucking artist, give him the tools, he’ll get you something out of it.  It should never have worked this well.

Die Hard was, and still is, the mature General in the room. The unquestionable leader to whom all answer and mimic. Even today.  Jason Bourne?  Even you owe more than you’d care to admit to this movie.  Die Hard has the post-modern eye and coolness of Michael Mann without being too still.  It has the gusto of Rambo, yet retreats just before overkilling.  It knows when and how to avoid going OTT, yet it’s not low key.  It’s not laughable, yet it’s funny.  It’s the small considerations that elevate it.  The fact that the recoil-less anti-tank rifle needs to be bolted to the ground, that was McTiernan’s idea.  He even designed that weapon.  Die Hard is probably the first action movie where its villains flashbang their enemies, and this was in the ’80s.  It’s a movie where ammo must be taken into consideration.  Yes, John McClane was the vulnerable everyman, but to use a quote from another movie, its villains were also equally the ‘not fucking around crew’.  After writing this, I still haven’t even gotten into Alan Rickman, Bruce Willis’ comedic timing or the realistic audio.  McTiernan even went out of his way to have precise muzzle flashes and gun reports.  On Die Hard, I could literally sing its praises all night.

Die Hard is the ultimate not-fucking-around action movie.  I’m not sure how its literally possible to translate something to the screen that’ll better this.  It’s what happens when a master outdoes even himself.