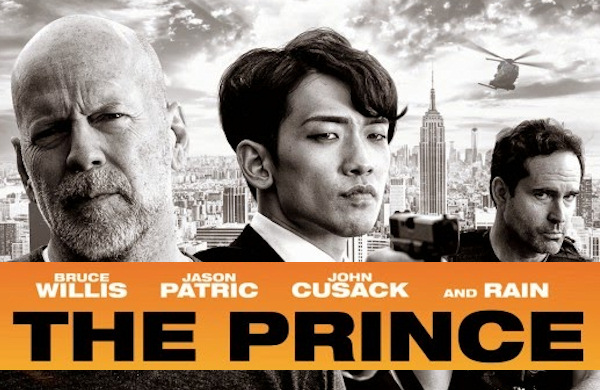 Runtime: 93 Mins
Rated: R
What To Expect: A depressing waste of time with con-job cameos

I’ll never understand why men worth many millions appear in movies like this in glorified cameo roles.  Bruce Willis, how many millions are enough?  How many tens of millions does it take to satisfy you?  Shame on you for cashing in on grim garbage like this.  Do people like Bruce Willis and John Cusack do it to keep busy?  No, that’s no excuse either.  Because if that was the case, they wouldn’t show up to shoot for three days.  They’d really get their teeth into it instead.  They couldn’t get their teeth into this though, even if they wanted to.  And neither can anyone attempting to watch it.  The Prince is a long and gruelling 93 minutes.

This movie is a glorified Taken rip off,  shot on a budget of coupons and dimes with actors who really do not give a fuck and obviously want to be somewhere else.  Jason Patric is a former gangster who has learned that his daughter has gone missing in another city, a city controlled by mob boss Bruce Willis.  So he goes on a tedious, boring road trip with his daughter’s friend, in an attempt to find her.  Along the way, he beats information out of people clearly not used to acting in scenes where the camera shakes quite vigorously.  Eventually he is lead to Bruce Willis, who he has beef with, then takes care of business with fellow shady criminal John Cusack.  If that sounds appealing, it really, really is not.  It mostly features Jason Patric walking around looking sullen for around 80 of those 93 minutes.

The only redeeming part of this movie is the appearance of ultra eye-candy Jessica Lowndes.  I will do anyone reading this a favour and link you directly to Google Image: Jessica Lowndes.  Having clicked that, you’ve basically seen the only reason one might even glance at this horribly dull cash-in job.  There is nothing else to recommend here, literally.

And now my biggest complaint with this movie.  The blatant false advertising.  Why is Bruce Willis on the cover of this DVD?  He is in the movie for about ten minutes, maybe more, but probably less.  This is a cynical ploy that plagues these types of movies.  Shoot a pile of crap, pay a famous actor using a large part of your budget to shoot for two days, then stick him on the cover.  Not only is Willis barely in the movie, his acting is downright insulting.  We know that Willis can be prissy in real life, and it shows quite obviously here that he has nothing but contempt for the movie.  Bruce Willis knows that it’s poor but will damned sure take that pay day.  What about the people who paid for this, Bruno?  You’ll waste their time but have no problem taking their money?  Same goes for John Cusack, but at least he’s acting in this movie.  For the 140 seconds (or whatever it is) he appears for.

Avoid this bait-and-switch DTV slop.  Don’t be fooled.  ManlyMovie has endured so that you do not have to.  Save your time and money and watch Out Of The Furnace or Cold In July instead.