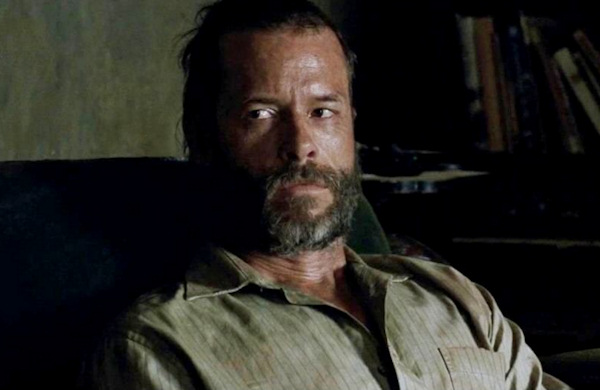 Runtime: 103 Mins
Rated: R
What To Expect: A violent, callous look at what happens after the nanny state goes pop

I really liked this movie.  It’s rough and determined and unflinching.  Kind of like the original Mad Max, but with elements from The Road replacing the high octane chases.  This is David Michôd’s follow up to the underrated Animal Kingdom, which was a depiction of gangsters in contemporary Australia.  The Rover is a western, but not a typical one.  The old westerns would feature gangs making their way as a country (The United States) developed through its youth, finding itself as a society and experiencing national growing pains.  This movie is an inversion: gangsters making their way through the dismantling of a country and the collapse of society, taking advantage of the lack of law.  And given the current economic situation, the setting alone makes this worth watching.

Ten years after a global economic collapse, ‘shell of a man’ Eric (Guy Pearce) goes batshit in the Australian outback when a gang of Americans steel his wheels.  He manages to kidnap one of their men, Reynolds (Robert Pattinson), and force him to direct him to the gang, so that he can murder them and reacquire his vehicle.  A very manly premise indeed – never fuck with a man’s wheels, you just don’t do it.  Of course there’s a lot more rumbling beneath the surface of this movie than a simple revenge thriller.  It doesn’t take long to establish Pearce as a full blown lunatic with nothing to lose, a metaphor for the backdrop of collapse.  If you’re not down with men who execute people for minor inconveniences on their path to settle a score, you’re probably not going to even like his character much.  For me though, that is part of the charm.

This is a character driven movie, so if you don’t like Pearce, you probably won’t like the movie. There’s another pivotal character in here too, for Pearce to bounce of off, Robert Pattinson.  I can say with honesty while watching this movie I was blissfully unaware that he was from one of those Twilight movies.  Great performance, I don’t care what type of girlie-man vampire he played elsewhere.  There is little plot in the movie either.  You’re basically supposed to draw your own metaphoric conclusions and indulge in the dangerous hell hole the director has created.

Turns out, lawless Australia after an economic collapse is a rough place.  Lot’s of bartering, lots of stand offs with shotguns.  Despite the threadbare plot there’s a lot to digest.  For example, why are there Americans running amok?  My guess was they were former U.S. soldiers stationed there to offset the Chinese threat and abandoned after the collapse, although the more simple of the brothers speaks of different employment.  Some people might consider such questions existing in a movie as lazy story-telling, but that’s not the case.  It’s all about the backdrop of wonder, it’s deliberate.  For me it works, but if you like your movies to speak to you more directly, this kind of thing could present a problem.  I got caught up in the evocative menace of this movie, as well as the killer performances.  Others won’t.  They’ll find it boring and demand straight answers.  So visit this at your discretion.