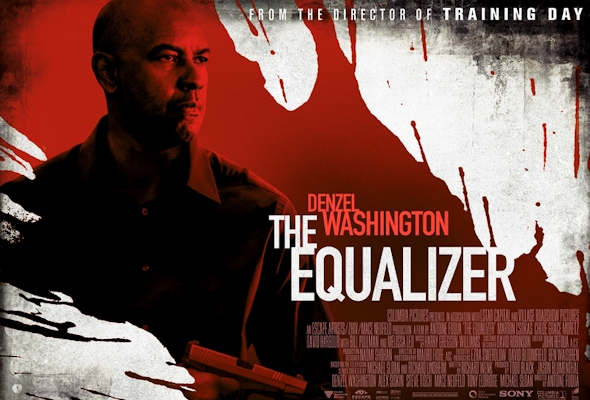 I really expected better from this movie.  It had a good lead in Denzel Washington, even better director in Antoine Fuqua and a solid premise.  Vigilantism is damned sure a good way to start a manly movie.  The reports coming from Sony also suggested something special, and not just PR talk either.  They’ve already got at least one sequel in mind, a first for Denzel Washington I think.  Well they need to make the second movie better than the first, which isn’t bad but, y’know, kinda dull.

We all know the premise for this so it doesn’t really need an in depth walkthrough.  Denzel Washington is Robert McCall, a shady former soldier with a ‘certain set of skills’.  Same as the guy played by Robert Woodward in the original TV series.  McCall now works at a hardware store and has left his old life behind him and enjoys reading books and boosting the esteem of fat colleagues and bewildered prostitutes.  But when one hooker he has befriended catches a particularly brutal beating, McCall, having seen enough, goes to war with the entirety of the Russian mob.

The first half of this movie is good, even if it is slow to start.  It builds anticipation of what we hope is going to be righteous vengeance and furious anger against pissants we love to hate.  It doesn’t really go that way though.  A good vigilante/revenge movie sets the tone by buildng up a bad guy or bad guys who we really hate and have them do something downright rotten to a character we really like, preferably defenceless.  That doesn’t really happen in The Equalizer.  The casus belli is very short and ineffective, the victim anonymous and the perpetrators dealt with relatively early.

From there and for most of the it’s just a stone faced Washington versus the mob, killing nameless and faceless pissants (who have never even heard of the victim) with such ease that never are we in doubt that he’s going to win, almost like a Seagal movie with a budget.  And even that’s entertaining for a while too, but it becomes tiresome by the end.  The violence certainly helps, I loved that.  Men who die by the hands of Denzel Washington’s Robert McCall should not expect a quick death, so kudos to Sony and Fuqua for upping the screen savagery here.

I don’t think I’d watch this movie twice, but I still want to see that sequel.  It’s a shaky start for The Equalizer.  You might love it, it could go either way for many, but I found it a bit dull.