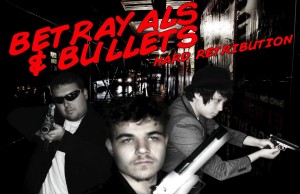 I always like revenge yarns.  Certain actors like Charlie Bronson made a career out of them.  Recently I checked out the first ever revenge short film that I’ve ever personally seen, Betrayals and Bullets: Hard Retribution.  This is a film that was put together by an amateur team in 2012 and I decided to check out the Blu-Ray release.  It’s not often that care is taken to put something like this onto Blu-Ray but to also give it extras that are normally only seen on mainstream releases.

Written, directed and starring Callum Knox, Betrayals and Bullets: Hard Retribution is a story as the title suggests, a wronged man out for revenge and he ain’t in the mood for diplomacy.  “Things are going to get nasty”.  The thing that struck me about this movie is that it reminded me on Mel Gibson’s Payback (1999), washed out, violent and moody.  Although I’m pretty sure the director was following the Sin City route, with Mickey Rourke and Co. in mind instead.  That was one thing I couldn’t really relate to – probably because I couldn’t relate to any of the Sin City movies either. But at its core, straight forward manly movie material here, with the editing especially impressive considering that it’s pretty much as amateur as you can get.

For a short movie, there’s an impressive amount of extras.  Video production diaries cover the process of making the movie and two separate commentary tracks add further insight.  It almost removes some of the closed curtain behind making a movie, from the ground up.  So noir is the direction to expect here, fully documented.  Potential is definitely there with Callum Knox, but I hope his next feature drops the Sin City riff.  Very interesting creation and documentation.