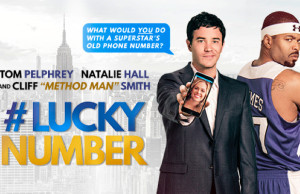 This movie has a novel idea of having a few guys find the cellphone of one of their idols, a superstar basketball player, and use it to their advantage.  Such as taking Bentleys for month-long test drives and jumping ahead in queues, heading right to the VIP section of clubs.  It had potential with a premise like that but unfortunately it slips up and falls into mediocrity, even if it falls somewhere between The Hangover series and a Matthew McConoughey rom-com.

Tom Pelphrey plays Bret Reynolds – mistaken by one girl for Burt Reynolds, one of the fewer scenes that elicit a smile, although I wouldn’t go as far as saying laugh.  He is down on his luck and has a crush on sportscaster Nikki Page, played by Natalie Hall, who seems somewhat bored from time to time.  Method Man plays Tyson ‘The Saint’ James, the aforementioned superstar basket ball player obsessed with sex.  When The Saint loses his phone, Reynolds and his obnoxious (over-acting) friends abuse the potential it can present.

I expected joyrides, theft, swindling and crazy weekends.  I was then ambushed by a slushy rom-com, not just a rom-com but a clichéd one, with Pelphrey wooing the girl of his dreams by using the cellphone and its contacts to make her believe he’s some sort of hotshot.  Hall then tells him he’s perfect and that she’s just sick of men who are dishonest.

Lucky Number has its moments, Method Man is someone I have not seen in a movie before but he seems to take to it naturally and has good comedic timing.  The film also enjoys flaunting its ‘R’ rating and manages to do so witout going the annoying route of turd jokes and the like, like many others of its ilk.  But I don’t want to see it again, I’ve simply had a belly full of romantic comedies over the years and that’s a large part of the reason for the foundation of this site.  And even then, this movie is not too good at that.