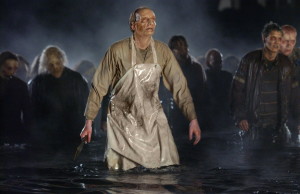 If recent zombie material isn’t cutting it for you, who better to go to than Romero, and a Romero movie that gets less raved about than the original trilogy?  People say Romero lost his touch with his second trilogy.  That’s mostly true, Survival Of The Dead (2009) and Diary Of The Dead (2007) are bad movies.  But Land Of The Dead isn’t a bad movie.  It’s not as good as the original trilogy, but not as bad as some people say and still better than the currently hyped Walking Dead for example.  It’s unlikely now that Romero will ever get another movie out, this could very well be his last good movie.  Time to take another look at it.

Out of the five movies it takes place at the end of the (loose and officially unrelated) timeline.  Take time to notice by the way, the biker from Dawn Of The Dead (1978) appearing in zombie form, probably more of an easter egg than official link. Set several years after the initial outbreak, Denis Hopper (Manly Man!) has set up a fortified community where he lives in a tall rise crib high above grounded pissants and far away from shuffling stiffs.
Aside from Romero’s trademark aesthetics, which are now better than ever with his best looking makeup work of all his movies, the unique pitch here is the answer to questions always teased at the end of zombie movies – what happens when people find sanctuary?  The answer, being people, they fuck it up.  There’s the usual Romero socialist subtext with Hopper’s capitalist honcho, but Romero can always be forgiven for these insertions because they don’t overstep the mark and impose themselves.  That’s not why we watch them anyway.  You don’t sit down with some wine to debate society, you bring the disc out with a six pack and point out when someone is a dumbass.

A good zombie movie has a sense of isolationism, claustrophobia and a sense of urgent stillness.  These kinds of things are present in Land Of The Dead, even when most don’t realise it.  An example is when the people in this movie venture outside of boundaries, they rarely stay in one location for too long.  There is a heightened sense of insecurity and foreboding, the kind of thing absent in the likes of The Walking Dead, where the people are the masters of the wilderness to accommodate endless love affairs.

In Romero movies, the zombie is the undisputed champion of the outdoors.  That’s still the case here.  However an interesting but ultimately unwelcome development in this movie.  The crux of the story is the evolution of the zombie. And that’s a problem.  The stiffs have developed a rudimentary consciousness, first hinted at in Day Of The Dead.  That’s not cool, it turns the movie especially towards it’s end into more of a run of the mill horror movie.  We prefer our zombies to have power in oppressiveness through sheer numbers, under a creepy palette.

Ultimately an imperfect experiment.  The question was asked, should zombies evolve?  The answer is no.  They should just keep coming.