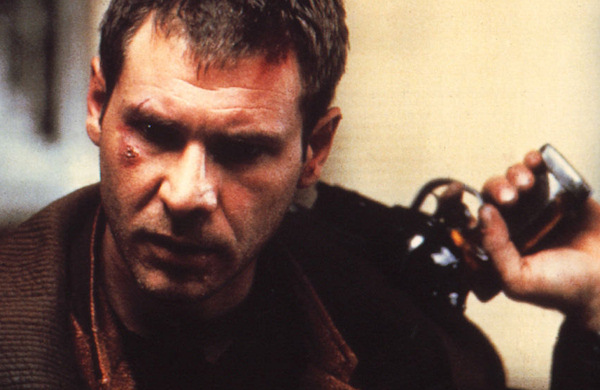 Not only is Ridley Scott filming an Alien prequel, he’s also set to create a Blade Runner sequel.  Scott recently gave an interview to a Chinese publication that kind of went under the radar.  A translation has now appeared online, which can be read below.

We decided to start the film off with the original starting block of the original film. We always loved the idea of a dystopian universe, and we start off at what I describe as a ‘factory farm’ – what would be a flat land with farming. Wyoming. Flat, not rolling – you can see for 20 miles. No fences, just plowed, dry dirt. Turn around and you see a massive tree, just dead, but the tree is being supported and kept alive by wires that are holding the tree up. It’s a bit likeGrapes of Wrath, there’s dust, and the tree is still standing. By that tree is a traditional, Grapes of Wrath-type white cottage with a porch.

Behind it at a distance of two miles, in the twilight, is this massive combine harvester that’s fertilizing this ground. You’ve got 16 Klieg lights on the front, and this combine is four times the size of this cottage. And now a spinner [a flying car] comes flying in, creating dust. Of course, traditionally chased by a dog that barks, the doors open, a guy gets out and there you’ve got Rick Deckard. He walks in the cottage, opens the door, sits down, smells stew, sits down and waits for the guy to pull up to the house to arrive.

The guy’s seen him, so the guy pulls the combine behind the cottage and it towers three stories above it, and the man climbs down from a ladder – a big man. He steps onto the balcony and he goes to Harrison’s side. The cottage actually [creaks]; this guy’s got to be 350 pounds. I’m not going to say anything else – you’ll have to go see the movie.

As he has alluded to there, this was originally intended for the first movie back in the day.  The scene continued with Deckard shooting the man, who is revealed to be a Replicant when Deckard rips his jaw off.