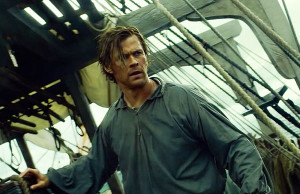 You can always find room for a good man versus beast feature.  Some of the best are from the ’50s and ’60s, at the height of animatronics   You know, back in the day when craftsmen cared about putting effort into making things look realistic, even if the end result didn’t look totally convincing.  It’s sad to see director Ron Howard who came out with great movies like Apollo 13 and Cinderella Man come out with lazy stuff like this, especially when he had a fairly decent cast.  Rarely does CGI go beyond bloated annoyance to complete ruin, but this movie is an example.

It’s the 1820s and whaling vessel The Essex sets out to retrieve 2,000 barrels of oil, the type extracted for whale fat to light cities, grease machinery etc.  Brendon Gleeson is a survivor of the disaster that befalls the ship and recites the events to a news reporter by candle light years later. Then we glance back and follow the ship as it departs with the quarrelling Chris Hemsworth, First Mate of captain Benjamin Walker.  As their mission proves near fruitless, they opt to head further into the unknown and it is there they are accosted by a 100 foot whale, Jaws’ Andre The Giant cousin, who has a penchant for head butting boats until they sink.

On paper this movie probably sounded great.  A survival epic tooled up for proper actors such as Cillian Murphy in the capable hands of Ron Howard.  And it does make for a nice manly story, survival, all hands on deck, a killer fish the size of a submarine.  It should have been a nice counterweight to the vacuous superhero quagmire we’re currently in.

Instead, In the Heart of the Sea is one of the single worst offenders of corner cutting movie fakery in living memory. A movie like this is going to live or die on how immersive it is.  Do we feel the crew’s isolation, do we fear what lurks beneath like we did in Jaws?  Absolutely not.  The backgrounds are all totally fake, you have a bunch of men standing on a makeshift ship deck in front of a green screen and it’s patently obvious, destroying all atmosphere.  What makes this worse is that when you create a computer generated reality (not to mention being stalked by a computer generated fish, far worse than a rubber fish), you must also simulate lighting.  In this movie, the lighting looks even worse than the backgrounds, completely synthetic.

Multiple times the cast are clearly in a tub, indoors filled with fresh water as electronic lights shine down from awkward angles.  It’s clear as day for everyone to see.  Sometimes it looks like they’re standing on ground as water is filled to their chests, despite the story having them swimming in the South Atlantic.  Even scenes set on land have near-laughably awful fake hillsides and computerized light beaming in from doors and windows.  It’s a nasty precedent to set if people just let this kind of film making continue without criticism.

A good example of how insulting this is, is that several times as the ship pitches up and down, the shadows move with it on the deck.  It doesn’t happen often, but it caught my attention and it’s unforgivably lazy.  As in, if we try to take that seriously, the sun moves in the sky, as the ‘deck’ is moved up and down with studio lights presumably attached to it.

If you’re willing to ignore the horrific otherworldly computerized ocean and the fact that the cast seems to be aware of how weak the movie is, maybe some people could find this yarn ‘average’. Not me, a generous four.