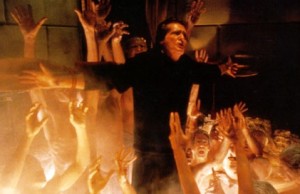 Why is there an exclamation point in the title of this entry?  There is good reason for it.  The Exorcist III is an underrated sequel as it stands, but the original and supposedly superior director’s cut has never been shown to the public.

William Peter Blatty’s Exorcist: Legion was in the can before being viewed by a secretary at Morgan Creek Productions, who convinced top brass that the movie was nothing like the original and not commercial enough, the film was then heavily altered.  The movie was made somewhat lighter with an added and unnecessary exorcism.  So a paranormal psychological thriller was somewhat dumbed down, even though the final product is still pretty good.

In the 25 years since the movie has had a cult following and has had significant attempts by not only fans but critics such as Mark Kermode to ‘find’ the original cut of the movie.  Morgan Creek Productions has repeatedly stated that they had lost it.  It kind of added to the mythical status of what was essentially the only ‘real’ sequel to The Exorcist.

Since the summer, Morgan Creek’s Twitter account started responding to the constant Tweets they’d get about Blatty’s original sequel/cut, as opposed to simply ignoring them.  Hints such as ‘funny you should mention that’ would show up indicating that something was found.

Now theninthconfiguration.com and Blatty himself have confirmed it, not only are we getting Exorcist: Legion, we’re also getting it on Blu-Ray.

And as for the news most people have been salivating about: the Blu-ray re-release of The Exorcist III (LEGION), and the missing (supposedly “lost”) footage. All I can say is:

Me: Morgan Creek have been posting some rather cryptic things on their Twitter account with regards to a DVD special release. Can you shed any light on what they may be talking about?

Bill: They are planning a new Blu Ray of “my cut.”

Regarding HOW the missing footage was found, Bill has said that it’s not clear as yet.

Keep checking TNC.com in the new year for further news! Exciting stuff ahead.

Now he doesn’t mention Blu-Ray specifically (Blatty is 88) but other sites such as Bloody-Disgusting are confirming that it shall indeed be a full remaster. Now having said all that, it would be remiss of them to not document this saga as an extras package for the release. And maybe get Blatty on commentary.