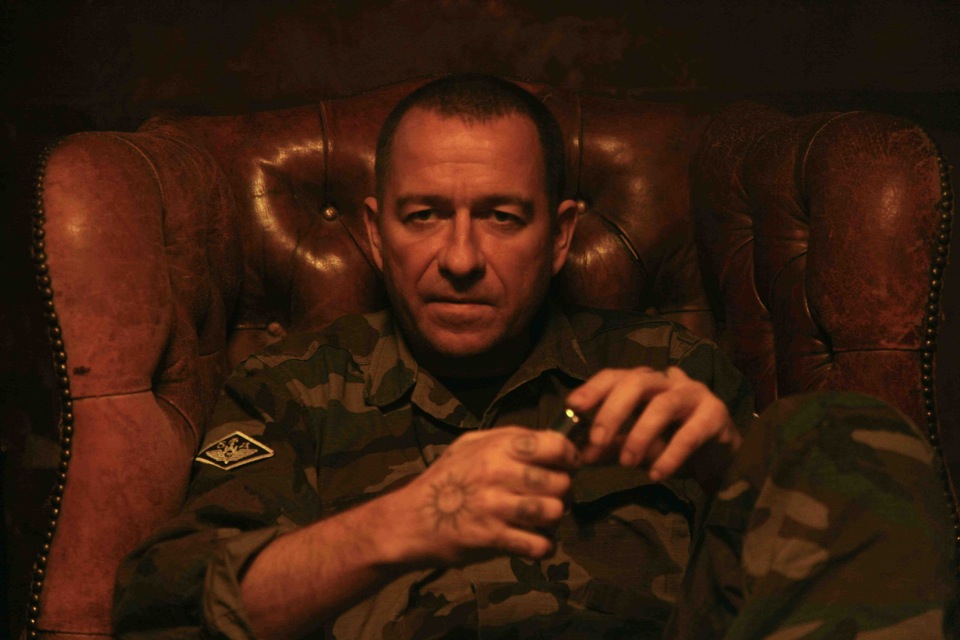 Following hot on the heels of The Horseman, here’s another slice of ultra-violence, this time from British make-up and effects specialist, Paul Hyett, in his directorial debut from 2012. Yes, another one that has slipped under my radar for the last few years.

Set in the war torn Balkans of the 1990s, the film concerns the plight of a deaf, mute girl dubbed “Angel” by her captor, the ruthless Viktor, proprietor of the eponymous establishment, a squalid, hellish bordello of suffering where the customers routinely batter and abuse the girls, all of whom are slaves, drugged and forced into prostitution against their will. Angel is abducted from her home by a force of marauding soldiers undertaking their duties just a little bit too enthusiastically, led by the inhuman Goran, played by Sean Pertwee. The older he gets, the more Pertwee seems to be channelling his father, the late Jon Pertwee, fondly remembered for his portrayal of Doctor Who back in the seventies, before the timelord became some kind of contemporary, pretty boy gay icon for the dumbed-down masses. Even as a heartless, murdering bastard like Goran, Pertwee can’t help being inherently likeable, just like his charismatic, time-travelling, karate-chopping dad.

Angel isn’t used as a prostitute, but rather a servant, cleaning up the girls, applying make up and injecting them with heroin, that kind of thing. The content matter of the film is grim, to say the least. The first half of the movie documents Angel’s arrival at the house and her daily work, which is hard to watch and tested my staying power to the limit, almost prompting me to switch off and leave the film for another time. I’m glad I persevered though, because it really changed direction and picked up the pace in the second half. Angel befriends another captive who is able to to speak sign language, allowing them to strike up a friendship. When she sees the girl being raped by a fucking monstrous and sadistic Balkan ape, who also happens to be one of Goran’s best men, she sneaks up on him from behind (slipping through a ventilation duct like a ghost sliding out of the television screen in a Japanese horror movie) and administers some well-earned payback. The hulking assailant doesn’t go down easily though, there’s a brutal, bloody struggle in which he’s hit and stabbed repeatedly before finally spitting blood for the last time and going down permanently. If this guy had been an enemy in a Resident Evil game you’d douse the corpse with petrol and trample on the ashes. When his body is discovered by the others, Goran vows to tear the house to the ground so that he can avenge his fallen comrade.

From there, the film becomes more of a by the numbers horror deal, with Angel being pursued through the labyrinthine house (she’s able to traverse the crawl spaces behind the walls and under the floors), eventually breaking out into the surrounding woods and making it to a nearby town. If you’ve seen films like Eden Lake and ’71 then this one might not hold too many surprises. Angel is closely pursued by the bad guys (or what’s left of them) and unable to trust anyone. It’s pretty competently handled though and it’s the characters that made it a worthwhile watch for me, Pertwee in particular being excellent. In one scene he says to an injured man, “That looks painful. Here..” before shooting the guy in the face.

I’m surprised I hadn’t seen this before now. I think it may have been buried for it’s sheer brutality. A quick check online revealed a rating of 21% on Rotten Tomatoes and a 1 star review from some piss ant at The Guardian who only saw fit to write 8 lines about it. Lazy cunt.

Like Rambo 4, The Seasoning House documents the horrors of war and it’s human monsters unflinchingly. Innocents are dragged out of their homes and shot on their front lawns Burmese style. Girls’ throats are slashed indiscriminately as an example to others. And the special effects are amply effective.

I wouldn’t rule out watching this one again. It’s not a Rampage or a Bone Tomahawk, few films are, but it’s definitely worth checking out at least once. Paul Hyett has since teamed up with Sean Pertwee again on the fairly decent werewolf flick, Howl, and has a new film, Heretiks, coming out soon.