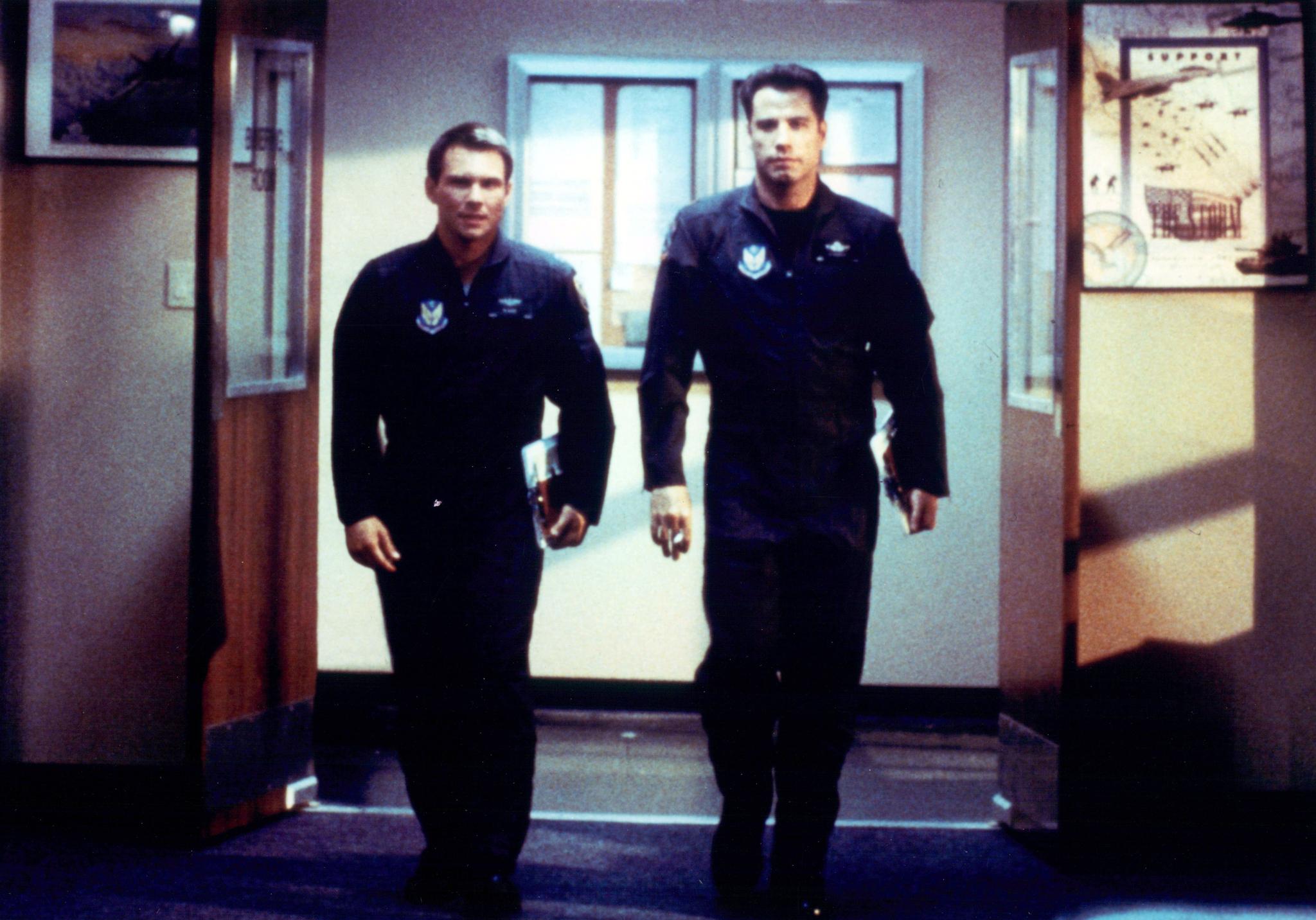 When I look back to the blockbusters of yesteryear, I sit back and wonder to myself “what the hell happened, Hollywood?” The recent influx of CGI-laden superhero fantasy adventures does not bother me as much as I expected. No, what bothers me is that Hollywood is shoehorning these films towards the mass media and stupidly kicking big-budgeted R-rated action fare to the curb. These films co-existed mutually in the past, with superhero fare properly aimed at teens, and R-rated action fare properly touted for the grown-ups, featured at the same time in multiplexes. Diversity in genres, so to speak.
Thankfully, I have my trusty Blu-Ray collection to sit through to avoid the current theatrical glut. John Woo’s Broken Arrow is one such movie that has enjoyed proper blockbuster business some 20 years ago. His second American feature film, following 1993’s ultra-violent Hard Target, is a stripped-down Thunderball that’s set in the Utah desert. A U.S. Air Force pilot goes rogue and steals two nuclear warheads, holding the government hostage. His young and cocky hotshot co-pilot sets out to stop him. Instead of the usual glitz and glamour that comes with such territory, Graham Yost’s (Speed) script hits the ground running and ditches the drama that drags most action films down, opting to urgently hurtle from one explosive action sequence after another with the momentum of a ping-pong ball in mid-air.

Compared to earlier John Woo fare, it is arguably his second-weakest film in between A Better Tomorrow up to this point (Once a Thief was as frothy as a horrendous Wong Jing outing despite the R-rating), but in the words of villain Vic Deakins (John Travolta), “I say goddamn, what a rush!” Woo uses his big budget to very good use here, never short-changing his audience despite 20th Century Fox somewhat restricting his creative freedom to deliver explosive high-octane action as early Michael Bay would, save for some trademark John Woo stylistics and the wildly over-the-top villains. But Woo will improve upon his Hollywood craft only a year later, with help from master troll Nicolas Cage, but that is for another review…

Technical-wise, this film looks and sounds great. There’s a lot of dynamic sound design at work here that adds to the total adrenaline rush already set by the outstanding, beautifully vivid (but never over-saturated) and panoramically-lensed practical effects, stunts & explosions. The editing is crisp and generous, allowing the audience to savour each action sequence like a big, fat, juicy steak. Put all of these together and you got yourself near-perfect Hollywood action filmmaking.

While the film delivers on its action promises, the script is where it falters a bit. I know it’s pointless to fault an American John Woo movie for its script flaws, but in this case, this one was surprisingly hollow in the character department. You don’t really feel for the stakes involved and the characters’ plights, even as stuff is going down hard around them. The lead actors do their darndest to color the script full of life, and they have to be commended. Christian Slater as the hero Riley Hale is a little bit bland but more than rises to the occasion with some death-defying heroics – he looked like he performed a majority of the dangerous stunts himself, so major props to him. The villain as portrayed by master troll Travolta is the charismatic one – confident, slimy, hilarious and wicked cool without ever losing control of his persona. Probably one of the most underrated villains of Hollywood circa 1990s – one that even detonates a nuke to see his word through! And his exit in the film is, quite simply, one of the manliest ways to go out I’ve ever seen on film.

It’s an action movie that’s not too short, not too long, and very brisk to watch. It’s another great beer-and-steak film that is a must-own on Blu-Ray for every action/John Woo/John Travolta/Christian Slater fan. Ain’t it cool?