Bowfinger may not immediately spring to mind when you think of manly comedies, but it’s underrated little gem from 1999, and it’s hard to find anyone with a negative word to say about it. It’s been on my Blu-ray wishlist for a long time, and now we have a release – from Fabulous Films in the UK. It felt like revisiting an old friend.

Fluffy, lazily-constructed Hollywood comedies are all the rage these days, and it’s therefore refreshing to behold a genuinely good studio-produced comedy. Fuelled by a colourful cast, Frank Oz’s amiable directorial touch and a delightfully witty, huggable script by star Steve Martin, Bowfinger is one of the best films of its kind. On top of providing a solid hour and a half of lull-free entertainment, Bowfinger hilariously takes the piss out of the Hollywood movie industry, with its complicated politics, pretences and superficiality. However, the film also reinforces the well-worn but nonetheless heart-warming message which lies at the centre of Tinseltown: that you can achieve your dreams if you possess the determination and drive.

The title character, Bobby Bowfinger (Steve Martin), is a struggling wannabe movie producer attempting to get his next picture off the ground. Pushing fifty years of age, the optimistic Bowfinger reads a script (written by his Iranian accountant) entitled Chubby Rain; a cheesy science fiction story about aliens arriving on earth in raindrops. Bobby is unable to secure Hollywood’s hottest actor, Kit Ramsey (Eddie Murphy), for the leading role, but nonetheless lies to his loyal crew; telling them that Kit has agreed to appear. To deal with the obvious problem facing him, Bobby decides to follow Kit and secretly film the star while his actors simply stroll up to him and say their lines. None the wiser about the whole scheme, Kit soon starts to believe that aliens are actually trying to abduct him.

Bowfinger is absolutely dynamite in terms of story, with the unique premise allowing plenty of leeway for a series of hilarious gags and set-pieces. It’s especially amusing to watch the inventive Bowfinger finding an answer for every problem. For instance, to covertly light one scene he has a (Mexican immigrant) crewmember hold a reflective “Work for Food” sign nearby. Meanwhile, the scenes of Bowfinger’s actors interacting with the unwitting Kit are side-splitting. Yet, the film is not merely a string of dumb laughs – each comic set-piece was beautifully sewn into the fabric of the narrative and has a purpose. Frank Oz was the right man for the job here; his masterful understanding of comedic timing and pacing is a tremendous asset. And even when the jokes take a break, Bowfinger is still zippy and entertaining because, unlike lazier comedies, the film has forward momentum, a legitimate plot and a bunch of characters that you find yourself caring about. And just when you think the best comedic moments have and gone, the film concludes with an excerpt from Bowfinger’s next magnum opus that’s guaranteed to have you rolling on the floor in fits of laughter. Indeed, the sense of fun never wanes, and you’ll be left yearning for more movies of this comic calibre.

Bowfinger is also more thoughtful than typical mainstream comedies – it’s primarily a biting satire of contemporary Hollywood. It’s to Tinseltown what This is Spinal Tap is to rock stars. The clever satire is most prominently present in the depiction of the cult religious group “MindHead”; an obvious send-up of the Church of Scientology. Additionally, Martin and Oz take several satirical jabs at the big, successful studio executives who are not overly passionate about the film industry and only care about the bottom line. See, Bowfinger is a lowly wannabe filmmaker who wants to make movies because he loves doing it, not because of the money. Like the infamously bad Ed Wood, Bowfinger lacks talent, but he is dedicated and enthusiastic; two characteristics missing in both the egotistical Kit Ramsey and the self-centred bigwig movie producer played by Robert Downey Jr. (in a performance predating his breakout success in the noughties). Fortunately, despite all of this, Bowfinger is not pretentious; it just has layers of thoughtfulness which give way to hilarious moments and a few genuinely touching, heartfelt scenes.

Martin is a delight as Bowfinger; his performance is just as energetic, appealing and hilarious as the script. Rather than an over-the-top caricature, Martin’s Bobby Bowfinger is likeable, down-to-earth and human. Sure, Martin is not Oscar-worthy, but acting this well-nuanced is a rarity in mainstream studio comedies. Meanwhile, Murphy is equally remarkable in dual role duty, playing both Kit Ramsey and Kit’s brother Jiff. Murphy pulls off both characters remarkably well, but Jiff is the standout. And as wannabe actress Daisy, Heather Graham’s performance is delightfully high-spirited and giddy, while Christine Baranski’s work is fabulous as one of Bowfinger’s loyal cast members. The list of standout performers goes on and on – suffice it to say, each and every one of them hit their marks brilliantly, and there is not a weak spot to be found.

Bowfinger is good, clean entertainment; achieving laughs without sacrificing narrative integrity or stooping to the level of flatulence jokes or bathroom humour. With gags and insights throughout the picture, it entertains while sending up Hollywood’s vanity and shallowness. And it has infinite replay value. 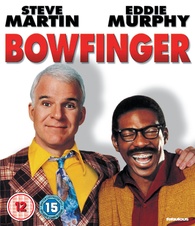 It’s clear that Fabulous Films were supplied with a dated HD master from Universal. Framed at 1.85:1, this does not look like a newly remastered effort, and it obviously wasn’t struck from a recent scan. Thus, this AVC-encoded 1080p presentation exhibits all the trademarks of early Universal catalogue Blu-rays – edge enhancement, print damage, and above all digital noise reduction. Detail remains distinctly average throughout, and the image looks smeary with most of the grain removed. Sharpness is reasonable, though ringing does crop up from time to time. It’s a notable step up from the DVD of course, and casual watchers will find it serviceable, but it’s a far cry from what it should be. I know this is a comedy from the ’90s and all, but it does deserve more care for its debut on Blu-ray.

But I suppose all of these shortcomings come down to the master, which was likely created for the DVD back in the day. I wonder if Universal will ever premiere the title in the USA, with a remastered picture. We’ll see.

Oh, and there are absolutely no subtitles, unfortunately.

As for the audio? Fabulous Films provide a robust DTS-HD MA 5.1 track, which is a huge step up compared to the DVD. Dialogue is crisp and easy to understand, but there’s limited surround activity, as to be expected from a comedy.

The disc comes with the same selection of bonus material available on the old DVD. Frank Oz provides a very good audio commentary (which is only selectable from the “Set Up” submenu, rather than “Extras”), and there’s a twenty-minute “Spotlight on Location” featurette which provides some nice insight into the production. You’ll also find some deleted scenes, an amusing three-minute selection of outtakes, and the theatrical trailer. It does lack the production notes and cast & crew bios that the DVD had, but really, who even read those in the first place?

On the whole, this is a worthy upgrade.