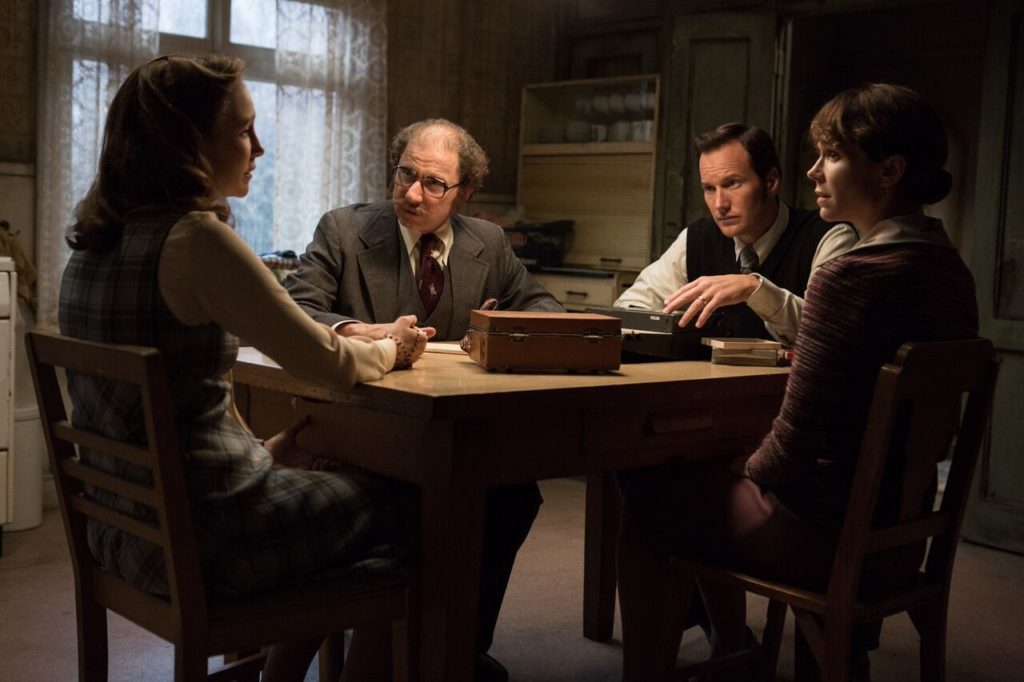 The DVD of this movie came through my letterbox this morning from Warner Bros, something I wasn’t expecting so it’s probably better to review it, even if it isn’t strictly falling under our niche here.  It’s another movie from a director I used to call a favourite, mostly because SAW and Death Sentence were a pair of skinned-knuckle movies that really didn’t seem to care for mainstream gloss.  I’ve kind of soured on the guy though, James Wan.  Fast 7 and The Conjuring weren’t my thing, too over the top in both cases.  But what about The Conjuring 2?

This movie is based on what is probably the most notorious piece of poltergeist bullying in recorded (literally) history.  The Enfield haunting occurred in England in the 1970’s, when a poltergeist entered a house and took a particular liking to 13 year old Janet Hodgson, enacting an apparent possession of the girl as well as tearing the place up.  There are two things that make the story interesting.  The first is the girl speaking in a low bass, man’s voice (taunting those in the room etc), a hoax you might say, until they filled the girl’s mouth with water and the voice continued it’s trash talking through her neck, the water was then spat out proving that she had not swallowed it.  The second is the account of the police, who pretty much confirmed that the laws of physics were being distorted within the house.  The case by itself, movie or not, is very interesting.

James Wan’s movie has the series’ central characters Ed and Lorraine Warren (Patrick Wilson and Vera Farmiga) travel to England to help the Hodgson family.  And you might think that the director of SAW could pull off something amazing with this story.  Well, like in the first movie, James Wan is apparently done with subtlety.  The Conjuring 2 is another montage of relentless overkill.  We can’t catch a break to take in the surroundings or steep ourselves in the atmosphere, it’s just a barrage of loud yelling and paranormal action, with jump scares and CGI monsters aplenty.  Did they film this movie with a view to selling it to the YouTube generation with their stunted attention spans?  If so, why is it so long?

I’ll give Wan one thing, he’s capable of bouts of intermittent brilliance and indeed the movie does manage to yank you out of your comfort zone here and there.  It also helps that Farmiga and Wilson are for my money two very skilled actors, they’re capable of of essential subtlety and understatement, but not enough to even out this kind of frustrating movie.  Madison Wolfe is also quite good as the stricken girl, better than the youngster I recently caught in a 2015 TV adaption of this story.

There’s not much here on this DVD, due for its R2 release on the 17th — I don’t know why they didn’t send me the Blu-Ray edition.  Extras come in the form of deleted scenes, around six minutes in total.  It has a good transfer though, as far as is possible I guess.  But my opinion cold be warped because it was upscaled to 4K on the screen I viewed it on. It does have the U/V and digital codes though, which will look way better on smaller screens such as your smartphone.

This is probably one for the girlfriend, they’ll dig this much more.