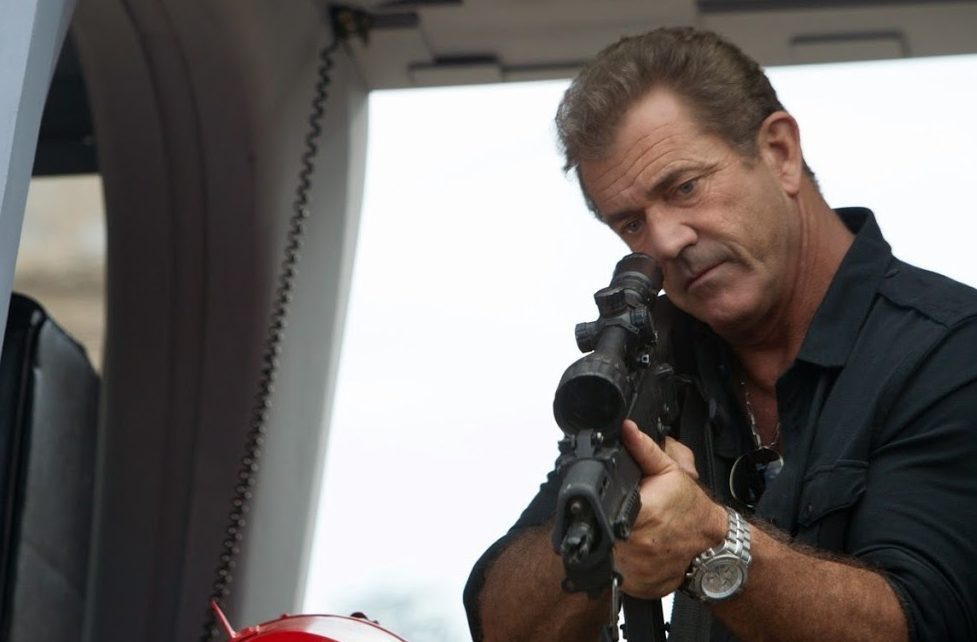 I made the jump to 4K this month, that rare move you make every once in a while.  I remember the first DVD I watched (Blade) on the Sony Playstation 2, then the first Blu-Ray I watched (Superman Returns) on the Sony Playstation 3.  Both jumps left an impression.  This one does too.  It’s another instance of not wanting to go back and eagerly looking for something else in the same format.  After watching a few movies in 4K, the unconscious became conscious when I switched back to something else in 1080p… the old stuff wasn’t cutting it.  But it’s true that I could probably have picked a better movie to review first.

Watching the movie again had a mild appeal; was The Expendables 3 really as bad as I remembered?  Even though it wasn’t truly dire per se, watching this movie is still upsetting because of the massively blown potential.  Maybe it even aches now more than it did then, now that we know that EX3 damaged the stock for all movies of this ilk.  It’s annoying to see Wesley Snipes and Mel Gibson pushed aside for pissants, half of whose names I can’t even remember, in a failed bid to create a Lerner-Universe.  The jokes are still awful and Rhonda Rousey’s acting appears even worse now than the last time I watched it.  How is that possible?  I don’t know.

And of course the movie is PG-13.  No-one is saying PG-13 movies are inherently unmanly in an of themselves, but clearly these stars were cut from a old school ‘R’ mould and in that sense, I don’t just blame Avi Lerner for this, I also blame Sylvester Stallone.  He should’ve said no.  How did that work out for them anyway?  When was the last time you heard real talk of a fourth movie?  But it’s okay for Stallone, who will next appear in Guardians of the Galaxy 2. So, I guess this is The Expendables 3’s legacy… a rather ugly bottom line for a cinematic retro niche.

I don’t really care to say anything more about this lowly film, to be honest.   This is a 5/10 movie.

The ultra high definition disc release comes from Lionsgate’s first batch of entries into the format.  It arrives with the normal 1080p disc, extras and digital download code.  This was the first movie I fully watched in 4K so it’s hard for me to compare it against something else, however I made the deliberate choice of looking at it first instead of Mad Max: Fury Road because I was aware that The Expendables 3 was filmed in native 4K with Red Eye cameras while, allegedly, Fury Road is an upscaled 2K digital source. 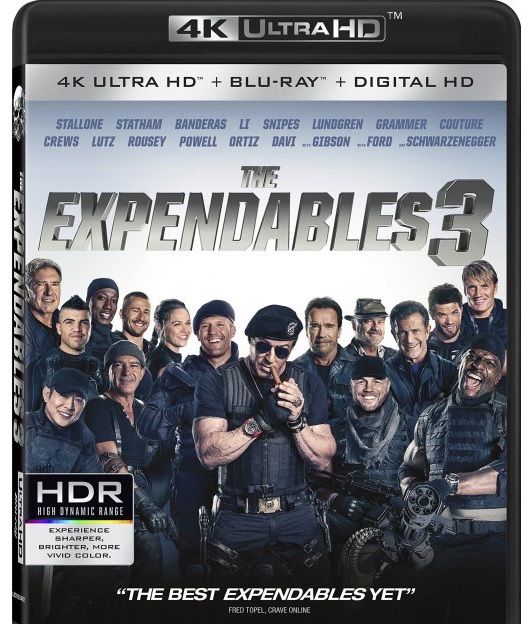 That said, EX3 in 4K is a weirdly mixed bag.  Often the movie is superior to 1080p – it’s clearly never on that level, but equally as often it’s downright astounding, with that rare feeling like you’re peering into the future taking hold.  The scene where Stallone disbands the Expendables at a bar is unlike anything I’ve ever seen, not just in clarity, but in naturally deep colour.  The movie does this repeatedly, catches you off guard by how powerful the transfer is.  I wish I had the capture technology to show close ups of Stallone standing around in aviator shades, it’s almost eerie.

The movie comes with a Dolby Atmos 7.2 soundtrack, but I can’t comment on that because I haven’t upgraded my system to that level.

While the main 4K movie is not the unrated version (that’s not good), you can find that on the 1080p disc, along with extras.  A fifty minute documentary takes us behind the scenes along with a gag reel and a 16 minute documentary about the ‘New Blood’, i.e. the no-name actors everyone resented.  But I don’t think anyone will show interest in this release because of any of the 1080p stuff.

The menus leave something to be desired, they’re definitely rushed and not cared for and the packaging is flimsy and cheap as hell.  Remove the main feature disc and there are those cheap holes cut out that go through to the paper artwork in order to save on the cost of plastics.  If you have a kid who likes to check things like this out, he could well stick his finger through and destroy the packaging.  Not impressive.

So as a final word, the 4K movie is truly impressive.  Even though I didn’t like director Patrick Hughes’ colour palette, the stuff is often breathtaking.  But why, if the movie was filmed with 4K cameras, do we not have anything in 4K extras?