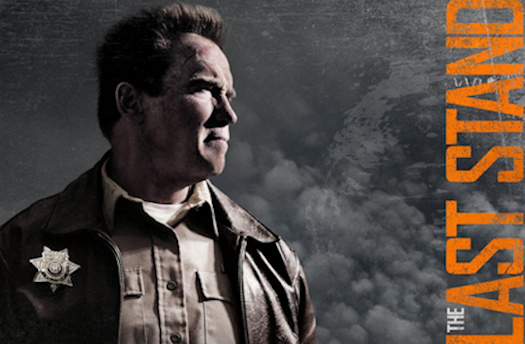 Rated: R
What To Expect: To come to the realisation that a weak Arnie movie is better than a bloated comic movie
It was almost like it was 20 years ago when this came out — 1993.  The three Planet Hollywood guys had each got a big theatrical movie coming out round about now.  Bruce had the first R-Rated Die Hard in 18 years.  Sly had his first standalone since Rambo (2008) in Bullet to the Head and Arnie had this.  Of all these guys, Arnie had most riding on The Last Stand.  It was his first comeback movie, The Expendables movies don’t really count. It’s definitely a ‘weak’ Arnie movie, that’s the bad thing.  I was honestly expecting better, but the director makes this look like a rushed chore.  The good news is it’s was best movie since Eraser, and that’s a long time ago.

First of all, throw caution in the garbage here.  I can’t go any further without mentioning the story. It is outrageous.  Even by Arnie standards, it enters and perhaps even surpasses Raw Deal territory.  A cartel kingpin escapes FBI custody and heads for the Mexican border.  He seemingly has all the funds in the world, an entire army is ready to assist his chase providing him with ramming vehicles, radio updates and pontoon bridges.

The elephant in the room is – if he has this kind of firepower, why doesn’t he just hop in a chopper and leave?  The movie actually addresses this.  Y’see, the kingpin wants a bit of a chase and likes fast cars.  So he goes on the run, in a 200mph+ 1,000BHP ZR1.  Anyway, the FBI calls Arnie to block the guy and his gang in his small town.  What ensues is, to use a quote from a Jason Statham movie, something that looks like a ‘bad day in Bosnia’.

But this movie has problems.  It’s clearly an oldschool actioner – the premise is ridiculous.  So why so much filler in the first half?  There’s a lot of dead weight.  In the likes of RAW DEAL, someone in production realised that character development and whatnot will look a bit stupid in the midst of gratuitous madness.  In that movie, action is pumped in to keep it afloat.  Not here, not in the first half at least.  But eventually it does work itself up to competent levels, just about.

This movie has three things going for it.  That ZR1 that the director seemed to have a fetish for – like me.  The violence, which is hilarious and fully developed – i.e. it was shot from the start and not added in post production, and avoided CGI.  It might even be in the top 3 most bloody Arnie movies.  And third, Arnie himself.  Listen man, his screen presence is just thunderous.  Funny, imposing, unique.  Arnold.  He hasn’t lost it, not a bit.  He’s as entertaining as Eastwood in the likes of Gran Torino with a shit project to work with.  It’s so effortless, I want more.  Even despite the slow start and the mediocre action sequences, Arnold saves the movie.

There are some cool ideas in this movie – the weapons museum, the ‘Vette etc – and most of them are handled badly.  This director seems like a noob.  It’s Arnie that saves this movie from being shit.  I hope the rest of his career is better.