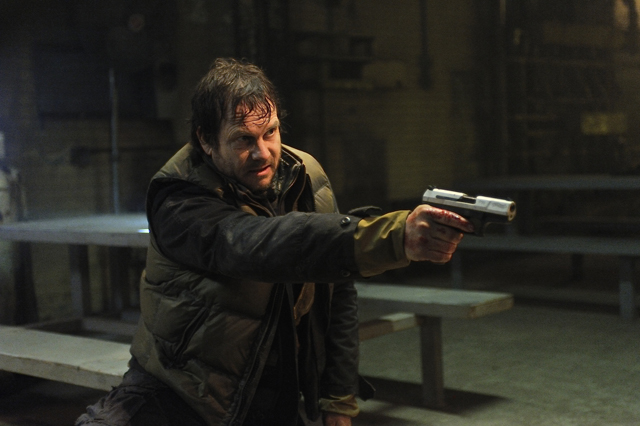 Some Manly Movies ‘slip the net’ every now and again, this is one of them. Post apocalypse? Laurence Fishburne? Raging cannibals? Private Hudson? If this was the 1990’s, you’d probably be seeing a poster of this movie at every bus stop terminal in the land. But times have changed and actors like Fishburne and Paxton don’t command the big payday and/or exposure that they used to. But neither are they stuck in DTV land, instead they’re more likely to appear in movies like this, a rough-around-the-edges sleeper movie. Blood gushes, Fisburne stares down stone cold psychotic ‘Lord Humungus’ type enemies, Paxton does his old whining but likeable asshole deal where he plays, well, the old Bill Paxton. What’s not to like?

The synopsis is a genre favourite within mandom viewing – the violent post apocalypse yarn. Another ice age has struck earth and what is left of humanity now lives beneath the surface in sparse outposts. When one of the outposts stops responding to the others, a small contingent is sent out to see what went wrong. They run into raging cannibals who want some of that good homosapien loin and, thus, the hunt is on. And you know, it makes sense – did you know that the first time humans ate meat was during the last ice age? We had no other option. I cannot rule out eating my neighbour in such a situation. Anyway, while it isn’t ground breaking it is effective. Part ‘The Road’, part ‘The Postman’ and with Bill Paxton pulling a grey area character who isn’t afraid to kill to survive. It doesn’t claim to be Citizen Kane but it does steam along with what it’s good at – atmospheric horror.

The movie is a Canadian production on a relatively small budget ($16,000,000), but every dollar is put to screen and production values were clearly respected. They do a nice job of laying a heavy and bleak winter over the screen, in particular, the scene where Fishburne holds off his foes over an abandoned bridge, while done mostly with CGI, isn’t too far off the biggest Hollywood features of this year. The bunker scenes were even filmed on location at a former NORAD centre. The cannibal element is also a nice touch, they really do come across as feral and savage, the violence used by (and against) them only adds to it. Problems, on the other hand, arise through a shortened run time which makes it feel rushed. Another thing, while Paxton and Fishburne are here, the amount of screen time they have could well have been one of these ‘weekend shoots’, they don’t appear enough. The bad guys literally don’t speak one word either. But I guess beastly grunting is better than bad dialogue.

It could have been better, but it could more probably and likely have been worse. This is one to keep, it could easily be watched twice.