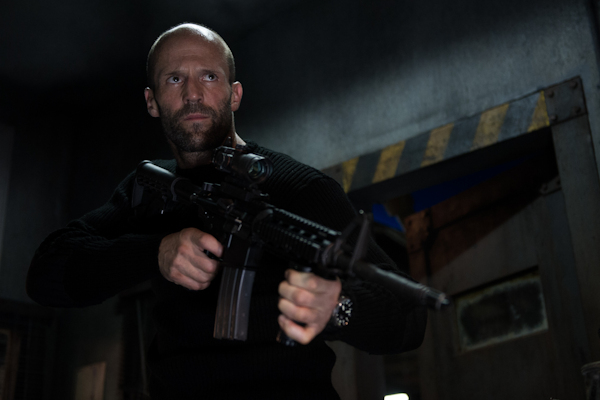 Run Time: 2 hours total approx
Rated: R
What To Expect: One of the manliest movies of 2016 arrives in impressive 4K, as opposed to many weak spit-shined 1080p releases of the same format

I didn’t have much time for the first Mechanic, the 2011 version that is.  It didn’t live up to the Charles Bronson and Jan Michael Vincent original, I felt.  Although it was a decent movie, it kind of amped up the seriousness but didn’t really convince all that much as a violent assassin thriller.  This sequel though, is different.  It goes the Commando route and plays to Jason Statham’s strengths… raw, manly, mass murder with a truly astonishing body count.  This is one for the Blu-Ray shelf.

The first half sets up the ‘story’ (such as it is), with Wetwork hitman Arthur Bishop (Jason Statham) having his woman, Gina (Jessica Alba) kidnapped by baddie Riah Crain (Sam Hazeldine), an appropriately manly villain name I thought.  If she is to survive, Bishop must use his unique skills to kill three highly protected men, culminating with the most difficult, the super villain and submarine hoarder (manly!) Max Adams, played by the troll Tommy Lee Jones.  Bishop has no problem in killing these men, but he also develops an aspiration to kill Crain and his goons too.  All of them.

The first half of this movie plays it slow and tries very hard to be another serious thriller.  And even though the locations, the Thai beaches and the high-rise restaurants all looked good, it all felt a bit flat to me.  Unconvincing, I felt a 6/10 coming along.  The ‘twist’ also felt overwritten and ill-convincing.

But then the murdering started.

Somewhere in the second half or maybe second of three acts, Statham begins killing people.  At first, the methods of murder are mildly inventive (gotta be stealth and all, if you want your movie to be taken seriously).  But then, the makers of this movie simply said, fuck that, and upped the ante into mass murder.  Statham kills his targets, sure, but he also makes repeated attempts to kill the man who is blackmailing him.  Particularly as the third act begins, we are in full-blown John Matrix mode.  The movie barely stops to update us with nuisance things like ‘plot’ and instead simply transports Statham from one killing platform to the next.

The last half hour of this movie reminds me of old 16 bit video games.  You take a man with a weapon and have him steadily progress sideways, killing high and low.  Eventually, he’ll proceed to the next stage with perhaps a brief interlude about story in between.  And you know what, I fucking love it.  The pacing in this movie is amazing, Arthur Bishop is worse than the Terminator – take the scene where he kills around 50 men in a U-Boat pen, then transports himself to a giant yacht, to resume the killing there. It’s just seamless, yet hugely entertaining. Wall to wall violence, scarcely believable, yet gloriously manly.

Although I am sad that Tommy Lee Jones, thoroughly in on the fun, is used somewhat frugally, this movie makes me happy.  It’s a return to the old Statham, the lunacy of the Transporter movies, yet more violent than those movies ever had the balls to be.  This movie belongs in 1988.

I have to say that my experience with 4K stuff so far this year has been underwhelming.  I’m yet to see a movie prior to 2010 that blows me away, so I’m especially worried about some of our old favorites and what can be done with them.

One of the problems is that the newer movies are being presented with 2K intermediate scans, which are upscaled but essentially ‘fake’ 4K.  Unless I’m mistaken, this is another movie that is 2KI, however this one is much better.

First, a word on advertisement.  I’m not sure what it took for AVForums to get their own flyer stuck inside every Region 2 case, but they must have some pull at LionsGate.  I hope they’re giving honest reviews!  Only joking… 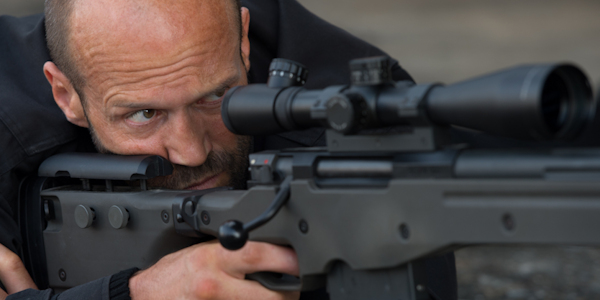 But back to The Mechanic: Resurrection.  Watching this on 4K UHD took me back to 2007 when I first started eating up movies on Blu-Ray, when each new title was gorgeous and impressive.  The Mechanic 2 boasts an often stunning picture and often closes in on my personal 4K reference picks The Revenant and Narcos.  Maybe a key indicator here is that I looked at Jason Statham in this movie and thought damn this guy is getting old.  Not 100% flattering for him, but good for viewers.

So recall that this movie hops all over the world with carefully chosen locations, including Southern Thailand, a contender for one of the most beautiful places in the world.  Combine the technology of HDR with glassy turquoise waters and you might get a picture in your head of how good it is.  Although it’s not perfect — it can appear unnaturally sharp here and there and somewhat lazy in other areas, this is easily streets ahead of 1080p.  Got a 4K setup?  You need to buy this version.

If you want to future proof and haven’t moved yet, also buy this version.  It comes with the 1080p version on a second disc so you can compare.    The standard version of course contains the extras, but this is very generic and short stuff.  We have a pair of 9 minute documentaries and a pair of 90 second (yeah…) documentaries where Michelle Yeoh just pulls some P.R. speak about her character.

To summarize, this is one of the manliest movies of 2016 and if you have a 4K screen, ask Santa for this… it’s a great Christmas drinking movie!

The Mechanic: Resurrection is released on Region 2 UHD on December 26th.