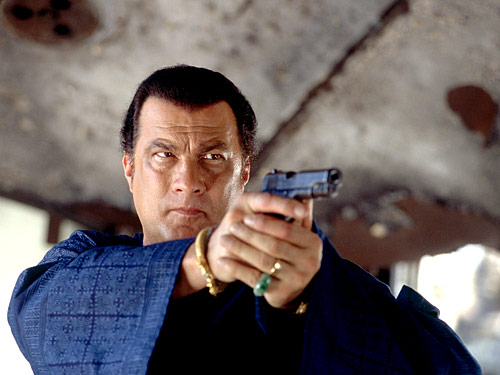 2003 was the year the human genome was finally sequenced by science. It was the year Saddam Hussein was captured and the year China launched its first ever space mission. But the most important event was Steven Seagal´s decision that it was time. Time to take another camera crew with him as he went undercover under his secret black ops identity of Jake Hopper.

The Opening credits show a nude young blonde taking a dip in the pool with the credits rolling over her body. Said lady has nothing to do with the plot, she won´t be introduced, nor will she play any role in the movie. But that doesn’t matter cause she’s nude, dude! An old mafia guy is watching her from afar not realizing that somebody is breaking into his house. That somebody is Sensei Seagal! Armed with black ops secret weapons and black ops hooks and ropes he is too quick to be seen by the mafia thugs. As always, he is also too quick for the camera lens to capture his physical form when using his chi, therefore his appearance changes whenever he performs a stunt like jumping, kicking or running. Sensei Seagal secretly cuts out a window, breaks into the mansion, tip toes to the kitchen and opens – the fridge. I´m not making this up, it´s really what happens. So just for the record: Here’s a movie called ‘Belly of the Beast’ and the opening scene features Steven Seagal invading a house and going directly to the fridge.

That´s another wise message from the Sensei. Learn to respect your beastly belly and keep feeding it. Cause real men need a belly. A ‘Belly of the Beast’!. This documentary will give you precious advice on how to keep up said belly as just in the next scene, the Sensei comes home and goes directly – to his own fridge. It´s stocked with delicious food his daughter has cooked for him, together with little notes she wrote saying ‘Monday’, ‘Tuesday’ etc. That´s a wise move from the Sensei´s daughter as eating a Tuesday meal on Monday or even a Friday meal on Tuesday could hurt the Sensei’s Beastly Belly. Sadly, the Sensei doesn’t have much time to enjoy his perfectly prepared meals because his loving daughter, who spend days in the kitchen of his US home fixing them for him, also managed to go on a backpack trip to Thailand at the same time and has been kidnapped by some bad guys while being there.

Game On! Sensei Seagal takes the next flight to Thailand and while he doesn’t have a clue who could have kidnapped his daughter he just takes a cab to the next hotel.

This proves to be another wise move by the Sensei since the Taxi Driver seems to be coincidentally related to the criminals who took his daughter, which is pretty convenient. The cab driver and a few other thugs try to kill Seagal who instead shows 2 of them some seriously deadly Aikido shit and chases the other 2 around the block to a street market. This market scene is an important point in the documentary. It’s where the key educational message is taken to the next level.

To feed your beastly belly, you need red meat. Red meat is good and powerful, as illustrated by the glorious shots of ribs and sliced up pigs that are shown in great detail. Vegetables on the other hand are weak. They don’t help to feed your beastly belly and therefore you should squash them. This is illustrated by a lot of ‘VAV’ – violence against vegetables – that happens in this scene. Tomatoes are squashed, salad is shot (multiple times), apples are run over and carrots are blown up. This political message is a clever foreshadowing of the genius ‘exploding melon’ scene of a later Sensei documentary called ‘Shadow Man’. But we will come to that point later, when the time is right.

So as the thugs attack him, Seagal kills one of them with his bare hands and waits for the other to grab a butcher knife. Under other circumstances Sensei Seagal would punch the guy out and kill him with his own knife. But here we are in Thailand, a place where it just so happens that a creepy old voodoo wizard dude is walking by. That just happens in Thailand from time to time, man. The wizard dude is neither introduced nor will he be introduced, he´s just there to walk by and freak people out. In this case he freaks out the thug who starts screaming. The Sensei looks at the wizard and back at the guy, his face saying– what´s wrong? Never seen a creepy old voodoo wizard dude, or what? But the thug is already in a panic, he starts to run, then slips on a tomato (fucking tomatoes, man!) and accidentally impales himself.

Since all this philosophical stuff about tomatoes is getting way too long I´ll make up for it by summing up this great,great documentary in the shortest way possible: Awesome Seagal stuff, one of the best of his DTV era.

Not only does it have a lot of big set pieces like a badass shootout at a train station, it also has some of the weirdest what-the-fuck moments ever captured on film. For example: When the kidnappers try to contact Sensei Seagal, they don´t send him a text, or an email, or a facebook message. They send him a hot asian super model, who strips in front of him, poors some water over her perfect boobs and reveals a hidden message from the kidnappers, artfully written over her nipples with invisible ink. Again, I´m not making this up, get the film and see for yourself.

Just as you think this documentary can´t get more awesome, there’s the final climax where the big bad is shooting arrows at Sensei Seagal, wHo quickly aims his gun at them and shoots the arrows mid-air, as shown by a matrix like computer animation of the bullets cutting through the arrows. None of our action heroes has ever done something so badass in a DTV movie climax, therefore you should cancel whatever plans you have for after work and just watch ‘Belly Of The Beast’. The only point it looses is for the fact that the nude chick from the opening montage doesn’t show up again.