A little late to the party here, but Mucho Macho’s stellar review of Kong: Skull Island got me in the mood for a dose of monster action, so I finally watched something that had been on my to do list for a while – the latest ‘real’ Godzilla movie, Godzilla: Resurgence, or Shin Godzilla, as it was known in Japan.

I’m not a fan of the latest Hollywood remake, I’ll say that right now. The king of the monsters wasn’t in that film nearly as much as he should have been and when we did get to see him for about two seconds he was in fucking bad shape. Having said that, Gareth Edwards’ film was a hell of a lot better than the 1998 atrocity, which was complete dog shit and put a bullet in the skull of Matthew Broderick’s career, a little unfairly, since he was hardly the most blameworthy of the people involved. Both of those films managed to trick me into spending my money at the cinema and both times I left thinking “I should’ve fucking known.” But I digress, this is a review of the latest instalment from series creators Toho, in Godzilla’s home country of Japan, so it wouldn’t be unreasonable to expect more. To expect something better.

Resurgence isn’t a monster melee, there’s no Mothra, King Ghidora, Rodan, Mechagodzilla and definitely no MUTOs or whatever the hell they were called, thankfully. What we have here is pretty much a straight up remake of the original classic. Godzilla shows up out of Tokyo bay and wreaks some havoc across the city as the Japanese army and officials pit their wits against him and cook up a plan to put a halt to his destructive rampage. It feels like a disaster movie, which is perfectly appropriate. Early in the film, scenes of tunnels collapsing, traffic going haywire and mobs of people trying to escape look eerily like actual footage from real life natural disasters. Godzilla is a brutal, seemingly unstoppable force of nature. And having been forced to eat nuclear waste for decades, he’s pissed.

A common problem with Godzilla movies is that there’s too much talking and not enough action and I’m afraid to say that is rather the case here. My perfect Godzilla movie would be at least 51% pure destruction, but that’s never what we get and once again it isn’t what we get this time either. Resurgence tips the scale in the wrong direction yet again. There’s a massive human cast, mainly composed of extras wearing suits or army uniforms and they all have a hell of a lot to say. To give them credit, they rattle off the dialogue as fast as they can, to the point where it’s almost comical, but there’s just too damn much of it and not all of it is really necessary. Some of the characters could’ve been omitted. Or just make the film two hours long and give us more action to keep the balance about right.

Instead of all that talking I’d have liked to have seen Godzilla go on a more prolonged rampage, he moves pretty slowly and spends a lot of time literally standing still, even as Japan’s National Defence Force are shooting him with tanks, launching rockets into his face and blasting him with 50mm machine guns from helicopters. All of which has zero effect of course. 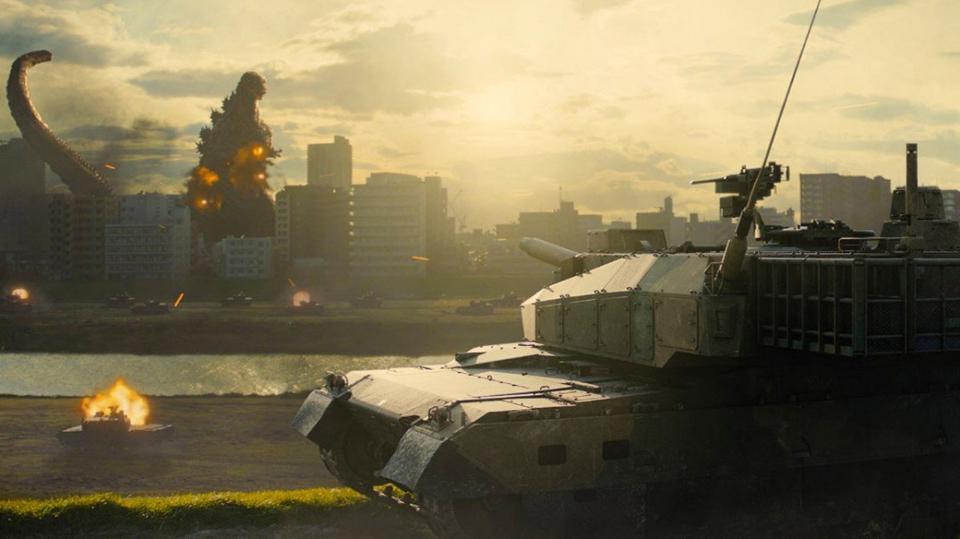 Despite the flaws though, I have to say I really quite enjoyed watching Godzilla Resurgence. Maybe it was just a relief to see the franchise back in Toho’s more capable hands. Don’t get me wrong, these people have produced some Godzilla-sized shits over the years, but they were certainly working close to the top of their game when they made this.

Godzilla has been redesigned slightly and, for me, he looks absolutely awesome, especially his mouth which is bulging with razor sharp teeth and as such gives him a very menacing look. More to the point, Godzilla is, as you will have gathered, a baddie again, just like he was in the original.

I heard that the monster is entirely computer-animated this time, but surprisingly he looks really good. Yes, in many shots it’s quite obvious that it’s CGI, but isn’t that always the case with computer generated effects. No matter how good they are you know you’re looking at something that just isn’t real, with the possible exception of Jurassic Park. To their credit, they’ve actually not done a bad job of making this CGI Godzilla kind of look like a guy in a rubber suit, which is what he always was after all. A few people may be put off by the bug-eyed, kind of embryonic stage that he starts off in, but bear with it, around about the half hour mark he ‘evolves’ into the real Godzilla that we all know and love, subject to the aforementioned modifications which bring him nicely up to date.

He’s still packing his radioactive breath, which he puts to good use and there’s an utterly brilliant scene where he fires multiple energy beams out of his dorsal fins, which light up the sky and cut through a bunch of nearby skyscrapers as they bring down the fighter jets that are attacking. That was probably my favourite scene in the movie and by itself made this one of Godzilla’s best outings to date. 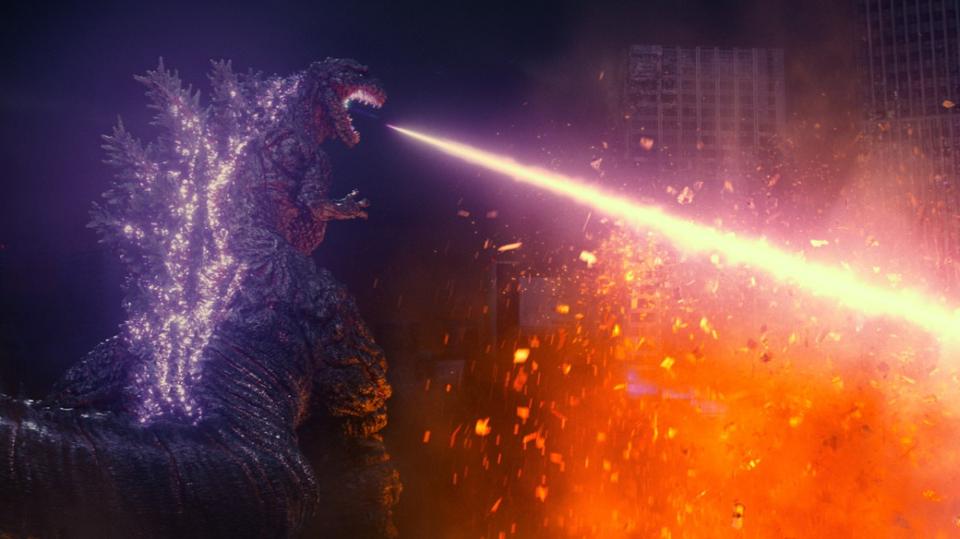 Another strength which this film boasts is that they used the score from the original. I don’t know if they re-recorded it, but the music sounds exactly the same as that from the original black and white classic. It’s a truly masterful piece of work. No fucking Jameraquai here, thank you very much, just a fantastic orchestral score which couldn’t be more fitting to the images we see on screen. You’ll want to turn up the volume when the end credits roll.

On the whole then, despite being a bit too talky, this is a definite return to form for the King of the Monsters, in more ways than one and definitely shits on Godzilla 2014. It’s renewed my interest in the series and inspired me to catch up with the more recent instalments that I haven’t seen like Godzilla 2000 and Final Wars. Hopefully, this is the start of a new run of top notch Godzilla films from Toho (the ending is left wide open for a sequel) and more of the same quality will follow. One thing’s for sure, the next Godzilla film I watch will be a Japanese one.