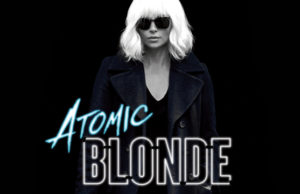 “Atomic Blonde” is a movie that I was not too familiar with until the decision was made that we were going to watch it at the cinema. All I remember from the movie’s trailer was that it starred Charlize Theron acting in one of those movies were a female pretends to kick the ass of men 10 times her size.

A lot of celebrity interviews nowadays in american late night talk shows have become all about SJW agendas so I don’t watch them as much as I used to. I heard while Charlize Theron was out promoting this movie that there were people saying that she should be the next James Bond. I think even when she was a guest on “The Tonight Show” the host Jimmy Fallon was even saying that he should be a “Bond Boy” or whatever the fuck they would be called. Now whether this “movement” was true or not at this point in history it’s hard to tell cause literally Femi-Nazis and Social Justice Warriors are acting like triggered zombie terrorist who have epileptic seizures when they don’t get their way or read things that were not approved beforehand by their big government overlords on niche websites.

A lot of women in the west are acting like they just got released from the cages of “The Male Zoo” and are only now being allowed to speak. By the way, the divorce rate will be much lower if this were the case, just saying. In Hollywood their ticket to “equality” is basically imitating men in everything they do, “We want to be Ghostbusters!” “We want to be James Bond” “We want to be Ocean’s 11, 12 and 13” Blah Blah Blah. The Hollywood feminist/SJW movement comes across like High School freshmen trying to be cool following High School seniors around & imitating them every chance they get.

So I wasn’t paying too much attention to this movie prior to seeing it but once I read that it was directed by one of the co-directors of “John Wick” ( David Leitch ) I was automatically intrigued. The movie was rated R, I like Charlize Theron who  has been in a bunch of shit I’ve liked, plus the movie took place in the 80s ..so why the fuck not.

So after watching it I thought “Atomic Blonde” is not a bad movie, it ain’t terrible but it’s not a great movie either. Leitch’s “John Wick” benefited from having a simple yet effective story that serve it’s purpose. Assholes fucked with the wrong man’s dog and car and had to pay …Let the body count begin. But “Atomic Blonde” suffers from wanting to be too ambitious and having a convoluted plot that takes away from what should’ve been a more fun film.

Theron plays an MI6 agent by the name of Lorraine Broughton, who’s working in Berlin in 1989 before the wall is about to be torn down to retrieve information that is of most importance to the safety of western intelligence officers. An MI6 agent had been in possession of a list containing the identities of every espionage officer in the city on both sides of the Cold War conflict but was chased down and killed by a Russian agent named Bakhtin played Jóhannes Jóhannesson, who took the list and now MI6 wants it back. The British government wants the list because the list will tell them the identity of Satchel, an MI6 mole who has been working with the Russians. The plot goes on from there, everybody wants the list, Charlize Theron doesn’t know who to trust & has to kick some ass & it just turns into one of those movies that has two or three “plot twist” just for the sake of it when in actuality had they streamline the story it would have made for a much better film.

One of the problems I have with this movie was as they chose the character of Charlize Theron narrate the events that took place in the story via an interrogation scene. This to me is a narrative choice that a lot of times I don’t understand why filmmakers decide to do this because no matter what’s going on on-screen you know the character is going to survive cause he or she is the one telling the fucking story and it takes away the suspense.

But not everything about this film is negative it does have some positives as well. One positive of this movie was the time in which the story took place. Any movie set in the 80s needs to have an 80 soundtrack and this movie does feature some cool 80 songs that were used in interesting situations.

The biggest positive of the movie is actually it’s star Charlize Theron. Theron for my money is one of the only few actresses in Hollywood right now that can be believable as an action star on-screen. I loved “Mad Max: Fury Road” & she was good in that. I don’t want her to be Jane Bond or whatever fucking property The P.C. Police wants to ruin next but in this film & role she was effective.

This movie was saved in my opinion in the third act. That’s when this film has it’s best action & fight scenes. I like the fact that Theron actually gets fucked up in the movie therefore making it more believable. She has some good fights & shootouts versus bad henchmen including one played by Daniel Bernhardt. Some of you may remember Bernhardt cause at one point in the 90s he was somewhat of a direct to video B-movie action star. For example he did Bloodsport 2 and 3 and was also the star of a couple of other action DTVs of the era, so it was nice to see the man still kicking ass.

More people saw the last “Fast and the Furious” movie than this film obviously but after watching this movie I thought maybe this was the character Theron should have played in that movie. It’s funny cause now the one who’s getting the least attention from these movies is Vin Diesel and I don’t think his ego would have been able to take it. As I was watching the last “F.F.” movie I kept wishing the movie was just a spin-off film between The Rock and Jason Statham that took place in prison and the story was just about them talking trash and fighting and I guess I was not the only one cause Statham & The Rock were the ones that received the most attention from the movie & if they had another character like the one Theron plays here there will be more people asking for another spin-off of another “F.F.” character & I think Diesel would’ve had another hissy fit.

Theron has been has in better movies than this, for example a lot of critics took a big ol’ shit on John Frankenheimer’s 2000 movie “Reindeer Games” but it’s a movie I happen to like a lot & recommend.

“Atomic Blonde” is one of those middle-of-the-road movies for me. Not bad, not great but okay. There was some potential to be really good but the messy plot prevented it from getting there.