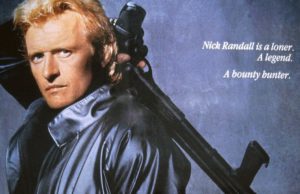 A few days ago I was going through some old manly movies, some old catalog of films to see which underrated, underappreciated gems we could bring some much deserved, better-late-than never recognition. After a couple of minutes I had my first choice. I would like to write about the 1987 manly, underappreciated, underrated, action classic “Wanted: Dead or Alive”.

What makes this movie manly? Well, everything. Before Marvel dominated our cinemas with their own “Movie Universe” this film takes place in a little universe of it’s own. The main character of this film is named Nick Randall who is a descendant of the character Josh Randall played by manly icon Steve McQueen in the 1958 TV show by the same name.

In this film Nick Randall, played by manly man Rutger Hauer, is a former CIA agent who got tired of the politics, bureaucracy and all the bullshit and left the agency & now makes a living working as a bounty hunter. Randall was doing his thing, capturing and bringing to justice for some good cash money criminal cancers of society until one day terrorist criminal mastermind Malak Al Rahim played by rock legend Gene Simmons arrives in the United States. Rahim soon after arriving in the U.S. declares war on America by committing terrorist acts. The police department calls Nick Randall in to help. Now Nick, working with his friend former cop Danny (William Russ) and his old partner (Robert Guillaume), signs on for the manly mission of bringing Malak Al Rahim down.

As one can imagine this movie was not a critics favorite. Often time critics point at cliches to single out the so-called crappiness of a film. Films of today also have their share of cliches but upon further examination, I’ll stick with the cliches of the 1980s action movie better. This movie has a ton of cliches of the times but they’re fucking great & I get great enjoyment out of them.

Have you guys noticed how so many of our old-school manly heroes in their respective movies,whether it was Eastwood, Stallone or Sensei Seagal to name a few, intervened in a robbery that was taking place in a supermarket, grocery store or liquor store? Well there’s a reason for that. You see these sacred establishments provide food, snacks, alcoholic beverages and condoms to manly citizens whom at some point in the day or night might require them & is the duty of our manly heroes to protect such sacred establishments from criminal scum. Randall not only foils a robbery but captures the criminal & brings him to the police station inside the trunk of his car took to collect the bounty. That’s a “Boss Move” right there.

Another thing that 80s and early 90s action movies feature a lot were the awesome apartments or “man-caves” that our manly heroes lived in. They always seemed to have the latest in home theater technology like LaserDiscs, plus a bar, cool neon light signs hanging from the walls, the works. These were apartments or “man-caves” that a young boy will look at and think to himself “When I grow up I want to have a place just like that, a place where me and my friends can get together, eat chicken wings, drink a lot of beer, watch the Super Bowl and hot chicks can come over and be fucked by me!” See these manly motherfuckers motivated us in more ways than one. I swear to God when I was a kid I thought cops or law enforcement people made “Brain Surgeon Money” judging by the places they lived in these movies.

In this movie Nick Randall takes it one step further. This manly man not only has a boat but he also set up residence in an abandoned factory of sorts in a shitty part of town and he turned it into his own fucking secured loft/ lair. Inside he has a kitchen, a workspace, a gym, living room area with stereo and TV, a basketball hoop, foosball table, target practice gallery, cars and motorcycles, plus the ever essential Vault like room which is super secured from the rest of the place and inside has a shitload of weapons and the latest high-tech computer which clearly he uses to identify and locate criminal scum with. I mean Batman would be proud of this motherfucker.

An important ingredient of these movies is the villain, which at times is an underrated aspect of these type of films. A great villain can elevate these type of movies because if the movie does not feature a great villain then you don’t feel the burden the hero has to carry or the challenges he must overcome. The villain of this movie is played by Gene Simmons and I must say in this film he does a great job bringing the scum arab terrorist to life. For kids in the 70s and 80s who loved rock music, chances were they were into kiss. Simmons wanted to venture into acting and broke into films by mostly playing villains. He was the villain in Michael Crichton’s 1984 movie “Runaway” starring the manly man with the manly mustache Tom Selleck

Simmons also played a villain in a movie that’s kind of hard to describe. Let’s just say think of the 80s, a lot of cocaine, plus a film camera and you probably get the best description of this movie. It’s one of those “it’s so bad it’s great” movie from the 80s. The film is titled “Never Too Young To Die” and in it Gene Simmons plays a hermaphrodite villain by the name of Velvet Von Ragnar…yep😂 Oh, & the hero is named Stargrove and is played by Uncle Jesse himself John Stamos. If you love bad movies from the 80s, this one is a must-see.

So many manly men lost their lives on that day inside that cinema, as well as many children who were watching that instructional guide to manhood on the big screen. Today such an act of violence would be applauded by Beta-Males who cried when their precious Hillary lost the election and went outside and blocked traffic while wearing vagina hats but to a boy like me, who dreamed of one day joining The Cobra Kai Karate Dojo and playing with Elisabeth Shue’s glorious tits, watching a movie theater showing “Rambo” exploding was just a heartbreaking experience.

These motherfuckers had to pay and Rutger Hauer was the man who was going to collect. Randall & Rahim were on a collision course that even cost Randall a great deal personally. This led to a satisfying conclusion & not to give anything away but the way our manly Bounty Hunter avenged the lives of the victims was another great “Boss Move” by our hero.

Sadly this movie never caught on the way that I thought it should. It debuted on the weekend of January 16th 1987 at the number 8 spot at the box office grossing over 2 million dollars on opening weekend and it went on to gross a total of $7,555,000 at the box office. In the late 80s it used to air frequently on cable and it gained a little bit of a bigger audience on video rentals as well. But time unfortunately has left a lot of movies like this in the rearview mirror so we have to hit the brakes, put it in reverse and get them.

If you like old-school action movies from the 1980s and you enjoy movies were the hero is an Alpha Dog who breaks all the rules to get the bad guy then this is a movie action fans of the era should enjoy. It’s full of 80s cliches but in my book those are fucking great, so if you’ve never seen it, watch it or if you haven’t seen it in a long time, it’s time to ReDiscover it. Judging it by it’s genre, it’s a cool 80s action movie in my opinion.

Related Items"All
← Previous Story One Second After Could Prove To Be A Good Movie
Next Story → REVIEW: The Hitman’s Bodyguard (2017)