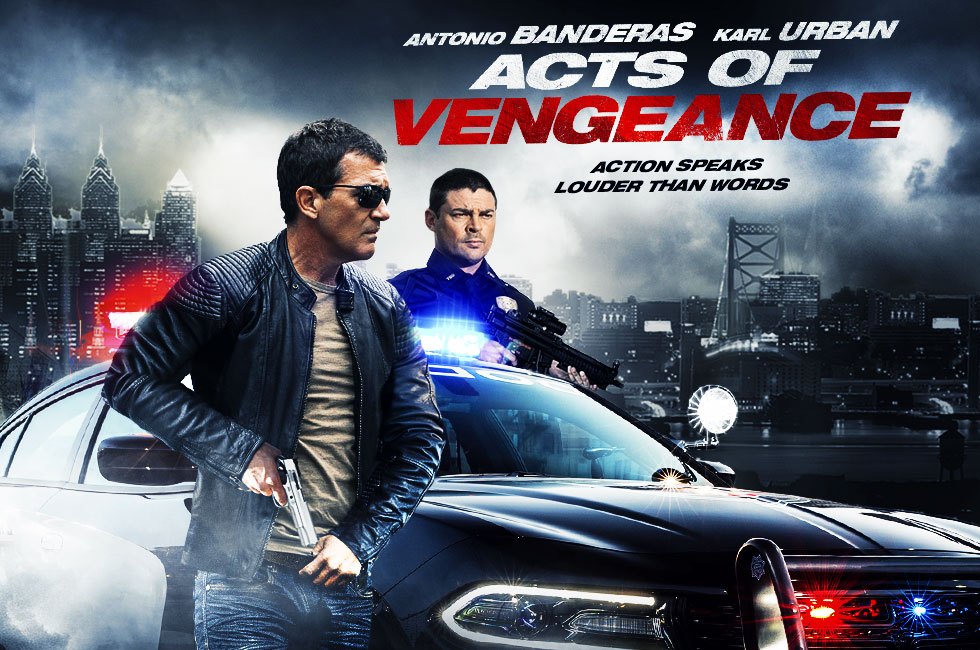 Run Time: 83 Mins
Rated: R
What To Expect: A moderately entertaining movie, because it sticks to the basics

Antonio Banderas seems to be throwing out these manly B-movies faster than most of us can keep up with. The latest is the Isaac Florentine-directed Acts of Vengeance. It was previously titled Stoic, a reference to the writings of Marcus Aurelius and a central theme of the movie.  Obviously, the new name is more marketable, probably in more ways than one (some argue that a VOD movie can be moderately more successful on release lists depending on which letter of the alphabet it begins with).

The film sees Banderas’ hot shot and fast talking lawyer, who boasts of speaking on average 80,000 words a day to shit-talk his clients out of trouble, neglect his wife and daughter, who then get murdered by some pissants.  Naturally, Banderas goes off the deep end, before collecting himself, then lifting weights, learning martial arts and vowing to seek ‘vengeance’ on the scum who wasted his family.  Pretty much a mildly altered Death Wish slant.

The movie is set in America, but is clearly filmed on Avi Lerner’s cheap VISMOD Cold War sets, right down to the same seats that Jason Statham and Sylvester Stallone used during the corner cutting scenes in The Expendables series.  That’s one of the things that bugs me about the film, they put a lot of time and effort into faking America, when it’s clearly Bulgaria.  It’s not Bulgaria that’s the problem, it’s the faking.  It would’ve been fine if they’d just set the movie in Bulgaria.

Anyway, what some people may call tropes, I’d call playing it safe.  Which is what a VOD movie like this should do.  We see; the training montage, the stray dog that turns out to be a loyal sidekick and the sacrificial pissant thugs who suffer a warm up beating from the vengeful madman on his quest to find the real killers.  And of course, it all leads to two men meeting at the end to settle things with their fists, at the end.

Other good things, Karl Urban is in the movie (not too much, though), he always cuts a good presence.  Antonio Banderas unsurprisingly shows up for work and, take the final fight scene… competently filmed, better than many of today’s ‘big’ movie fights.  Some of the cuts last 7 seconds.

A disposable movie that is worth one look.