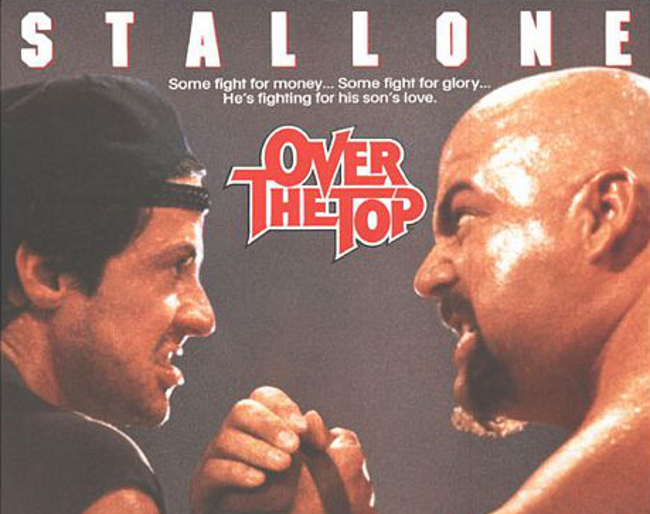 Sylvester Stallone has done many great manly movies over the years. Stallone fans talk a lot about the “Rocky” movies & the “Rambo” films for example but the man has done a lot of other cool manly films over the years. “Tango & Cash” and “Cobra” are two films which in my opinion, should have spawned sequels and become beloved Stallone franchises.

However there’s a movie he did back in 1987, 30 years ago, when films featuring highly testosterone manly characters were not illegal to be shown in cinemas across North America and the rest of the world, that I think it’s fucking great and should be given more love, that movie is the arm wrestling manly epic opus “Over The Top”.

In this 1980s manly classic, Sylvester Stallone plays the manly character with the manly name Lincoln Hawk. Hawk is a trucker who is struggling. He arm wrestles on the side to make extra money while trying to rebuild his life & get his shit back together. Hawk’s estranged wife Christina is very sick & asks that Hawk pick up their son Michael from Military School so that the 2 of them can get to know each other. I think Christina senses the end is near for her and is very important to her that her son reconnects with his father whom had left them ten years earlier. Michael’s controlling grandfather is named Jason Cutler who is a wealthy man and it’s played by manly icon Robert Loggia. Cutler has always hated Hawk and disapproved of his daughter’s relationship with him and was instrumental in Hawk’s decision to move away from his family. Cutler believes that Hawk has no right to be in his grandson’s life & hates that Christina had this arranged without his knowing or approval.

Hawk picks up Michael from school & Michael obviously not having a relationship with his father does not trust him and is very condescending towards Hawk. Hawk tries his best but Michael is very difficult to deal with, not only because his son is resentful of him for leaving his mother but this was 1987 and he was infected with a disease that still had not yet been diagnosed. This virus has spread world wide over the last 30 years and since it has been identified and diagnosed but 30 years ago, doctors & members of society did not know what it was. Michael was a 21st century Soft Beta Millennial Pussy who counted calories.

The Ronald Reagan Administration should have treated this virus more seriously and should have quarantined those infected and controlled the outbreak, so those of us 30 years later would not be dealing with The P.C. Feminazi Pussification of our culture.

Hawk loves Michael and realizes his son is not up to manly standards so he tries to not only reconnect with his son but to teach him how to be a grown up manly heterosexual.  Such methods today will be looked down upon and considered cavemanesque. But this was the 1980s and still fathers were allowed to put their sons in tough situations so that they would learn something and not cater to their every emotion and promote “Safe Spaces”. With Hawk’s manly paternal tough love lessons, Michael gradually starts to do what at one point seemed impossible, he was starting to grow into manly adulthood.

With such an iconic manly mentor, it is no surprise that Michael starts to trust his father. But Michael’s grandfather still is angry and sends his goons to kidnap Michael but of course our hero Lincoln Hawk stops such an attempt and retains possession of his son.

Hawk has a plan to rebuild his life. Hawk is planning to go to Vegas and compete in the World Armwrestling Championship and win the grand prize of $100,000 and also win a humongous manly truck that would intimidate Optimus Prime and start his own trucking company.

But something tragic happened. Once they made it to the hospital, Cristina passed away and Michael regressed to a Millennial Beta Calorie Counting Pussy and ran away to his grandfather and blamed his father for him not being able to say goodbye to his mom. But our manly hero would not be deterred and went to get Michael back in his grandfather’s home but was arrested and thrown in the slammer.

Once released from prison our manly hero decides to get back on track and go to Vegas and do what he set out to do, compete in the World Armwrestling Championship & try to rebuild his life.

One thing about Stallone is that no matter how much of an manly icon or how much of a “Macho Persona” he created for himself,  the man excelled at playing underdogs and making you believe time and time again that the odds were against him. Here Hawk bets on himself completely, he sells his truck for $7,000 and uses the money to place a bet on himself (as a 20-1 long shot) to win the tournament.  But there’s one big gigantic obstacle in front of him and that gigantic obstacle is the Man-Beast Bull Hurley.

We all have heard of comic book villains and James Bond villains but I must say that Stallone movies have a great rogues gallery and this film Bull Hurley is a great antagonist. Hurley was played by Rick Zumwalt who was an arm wrestling champion multiple times and an actor.  The man looked like he could easily beat the shit out of you in a bar if you accidentally stepped on his foot or tried taking his beer. Stallone once again had a great antagonist to try to beat and inspire those who dare to dream and try.

All leads to a manly optimistic conclusion that inspired boys like myself back in the day  to one day beat a big motherfucker in an arm wrestling competition or steal a car and go to Vegas.

This movie of course was shit on by critics at the time and unfortunately audiences as well did not appreciate its manly greatness. It opened at number 4 on opening weekend and it went on to make over 16 million dollars domestically on a 25 million dollar budget.

I get the feeling more people over the years and specially Stallone fans have grown to appreciate it but it’s not as loved as other of his manly classics IMO, heck even Stallone has taken shots at it. But the movie has a lot of things that I love.  It was directed by Menahem Golan who along with his cousin co-owned and ran Cannon Films, a great supporting cast of characters played by Robert Loggia, Rick Zumwalt and Hardcore Wrestling Legend Terry Funk. Plus it had a great father-son relationship story, a great simple yet very effective underdog brought to life by Sylvester Stallone and a kick-ass 80’$ soundtrack.

Speaking of the soundtrack it featured songs by Sammy Haggar

There have been many, many, many sports movies that have been made and released over the years but only one can claim to be the king of the arm wrestling genre and that is the manly epic that is “Over The Top”

It’s not Sylvester Stallone’s greatest movie but in my opinion one of his most underappreciated from the 80s.