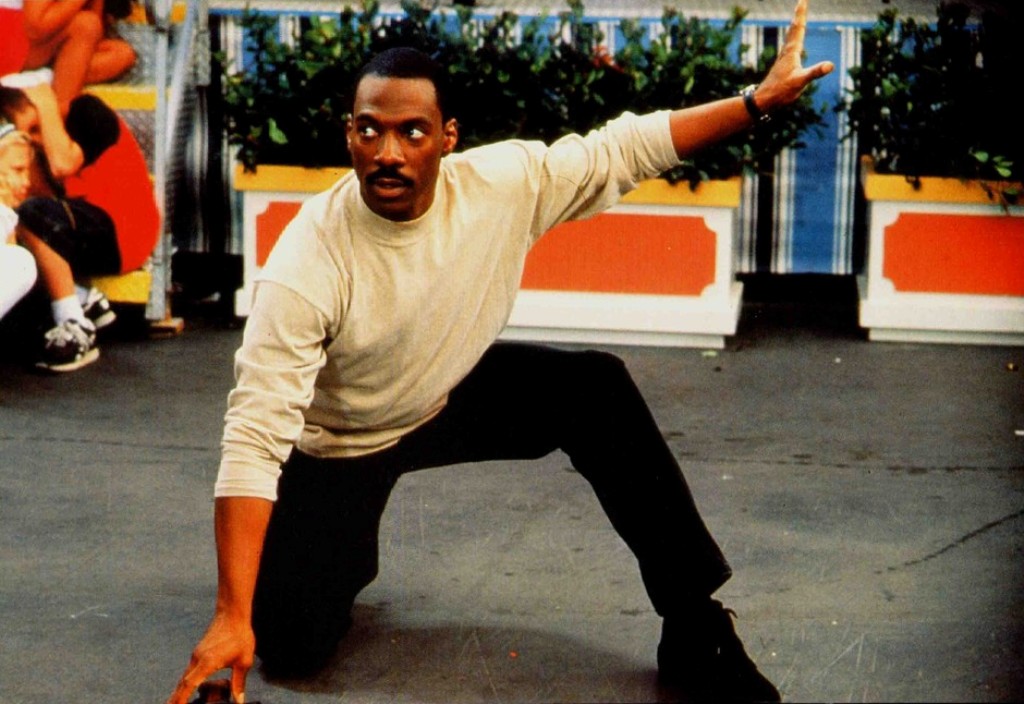 Run Time: 60 Mins
Rated: N/A
What To Expect: Hard to say, but the potential is low

Beverly Hills Cop has had a long and depressing history for over 20 years now.  Back before even Cop III arrived, there were plans to do a crossover movie with Crocodile Dundee (no, really).  Paul Hogan was into the idea, Eddie Murphy, unsurprisingly, was not.  With that idea axed, Cop III followed to blazing pitchforks and even Murphy himself shitting on the movie.  Fast forward through ten years of development hell, to a rumored shooting script for Cop IV where Billy Rosewood gets killed in the opening act.  Clint Morris of MovieHole leaks the scandal and leads a crusade to burn that variation of Cop IV at the stake.  Paramount shits their pants, probably already knowing it would suck, and cans the idea.  Then came the idea to do a TV show….

Spoilers?  Yes, they’re here, sort of.  It probably won’t be spoiled since none of us will ever likely see this pilot as well as the fact that only the pilot was filmed.  Anyway, this is basically a remake of the original movie.  Axel Foley’s son, Aaron Foley (played by Brandon T. Jackson) has found that a friend who was into some shady business killed, just as Foley senior had in the original movie.  And just like in the original movie, Foley junior is lead to Beverly Hills, to solve the case.  There, two detectives of a completely different culture to the Detroit precinct, where Foley hails from, reluctantly join him on the case.  One is career female detective, the other a cardboard by-the-book male.

You can’t really glean too much from this pilot screenplay.  For a start, screenplays are only ever going to tell you so much.  Second, Eddie Murphy is famous for improvising and ad-libbing.  So the actual product may well have been better.  But over all, it’s unimpressive.  It centres on Jackson for the most part, who is given run of the mill one liners, mostly derogatory observations about how uptight Beverly Hills policemen are, and how expensive everything there is.  Maybe Jackson did something with it, like Murphy did in the original movie, but I doubt it.  There are one or two laughs here and there, but a big problem for Jackson is he has no Rosewood or Taggart equivalent to bounce off.  Most of the characters are dull and lifeless.

It’s hard to say anything about the story.  You’re not going to give away too much in one episode, but I would wager it played out to be more or less run of the mill.  As far as action goes, I have to confess to be largely unfamiliar with Barry Sonnenfeld’s work, so for the two main action sequences, a shoot out and a chase sequence, it’s anyone’s guess how he handled them.  But presumably he had done so without much violence – it’s a more or less inoffensive script.  There is only one swear word that I recall, motherfucker, with the potent part of that word blanked out, like it was in DHINO.  This is Beverly Hills Cop, Foley should be running his mouth with ceaseless obscenity.  You can’t restrict Eddie like this…

Yes, by the way, Eddie Murphy is in this.  Maybe for around 20-30 minutes.  He shows up as Foley senior to help Foley junior on the case.  I will commend the writer for avoiding the insufferable cliché of having both father and son be at odds with each other.  You know, that shitty old chestnut where young hotshot son has maligned a pining father due to some past grievance.  That’s not here.  Instead, both Foleys are soon breaking and entering Beverly Hills mansions and basically fucking around.  Their back and forth lines are poor though, something I would have hoped Eddie Murphy would’ve intervened over.  Other famous names here, Judge Reinhold has a cameo as ‘Mayor Reinhold’.  I wonder if we’ll see that in Cop IV.

So, bottom line, it’s unimpressive and so by-the-book, it’s like it is some post-grad taking a shot at it.  My biggest complaint… even though it boasts of using Faltermeyer’s music and has Murphy and Reinhold, and Jackson isn’t a bad actor, it doesn’t ‘feel’ Beverly Hills Cop.  Brandon T. Jackson said that CBS turned this down because it was ‘too edgy’.  Well, I don’t believe that.  Didn’t read that way to me, and if that was its only problem, some other channel would’ve picked it up.

Now, Brett Ratner and Jerry Bruckheimer, over to you…