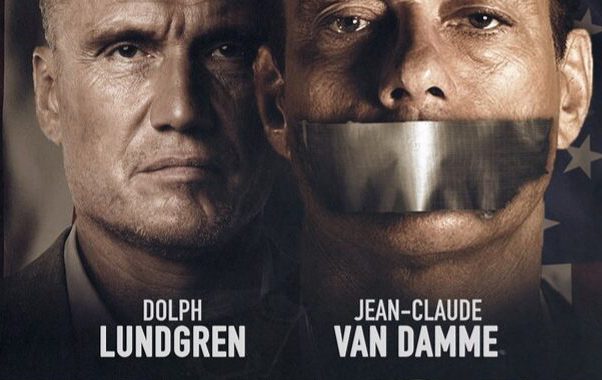 Here is a fool writing this review, because I watched the trailer for this movie a long time ago and was quietly excited about it.  The slick artwork for a VOD movie also further stewed up some promise.  Those hopes faded when people started speaking about how awful the film is, but it wasn’t until I watched it myself that I realized just how bad it is.  It’s the fifth team up for Jean Claude Van Damme and Dolph Lundgren.  And it’s another waste of everyone’s time.

The film sort of have an interesting premise; the Deep State has what it considers to be highly valuable prisoners, so important that their containment on land simply isn’t secure enough.  Not only is escape possible, but do-gooders in the main government can always stop by and make sure you’re not torturing them.  So someone comes up with an idea of stripping out a submarine and turning it into a sea-borne prison; no-one can detect it and no-one for damn sure can escape from it if it’s underwater.  On this submarine, Lundgren and Van Damme are prisoners, two ex-agents (what else?), who eventually launch a dual Casey Ryback insurrection against the crew.  Note by the way, that Van Damme and Lundgren are always enemies in their movies, so this is kind of a novelty here.

This premise might sound good, but trust me, by the halfway part of this cheap movie I was writhing in boredom, even though Van Damme has a full role (yes, Van Damme is in the whole movie, Lundgren however, is not).  It’s the old ‘USB drive with the secret files on it’ angle, the tell-tale sign that the writers are likely post graduate or equivalent, useless greenhorns.  They get Van Damme in an interrogation room early in the movie, and as soon as the interrogator asks “where is the drive?!”, you know that it’s all downhill from there.  Seriously, even Call of Duty games know better than to avoid this most tired of tropes.

Worse though than even the scripting, the production values.

This VODmit has the single worst submarine interior in the history of film.  It was clearly filmed inside a warehouse, with prefab walls that are ten feet high.  Some of the walls even look like stiffened cardboard with Korean televisions (the sub’s computer systems, see…) nailed to them.  At the beginning they boast about the depths the sub can dive to, yet here is a boat with no bulkheads!  None!  Here is a basic rule of a submarine – it must be able to withstand extreme pressure and this requires reinforcement right throughout the hull.  This one has nothing.  Worse, it even has glass walls. What do you think is going to happen in a submarine that dives, with no bulkheads and glass walls?  Let me tell you, the glass wall will explode right in front of your face, even with a bulkhead, and incapacitate members of your crew.

Beyond that, I really don’t know what else to say.  I commend Van Damme for showing up for the full duration and giving a rudimentary performance, I suppose.