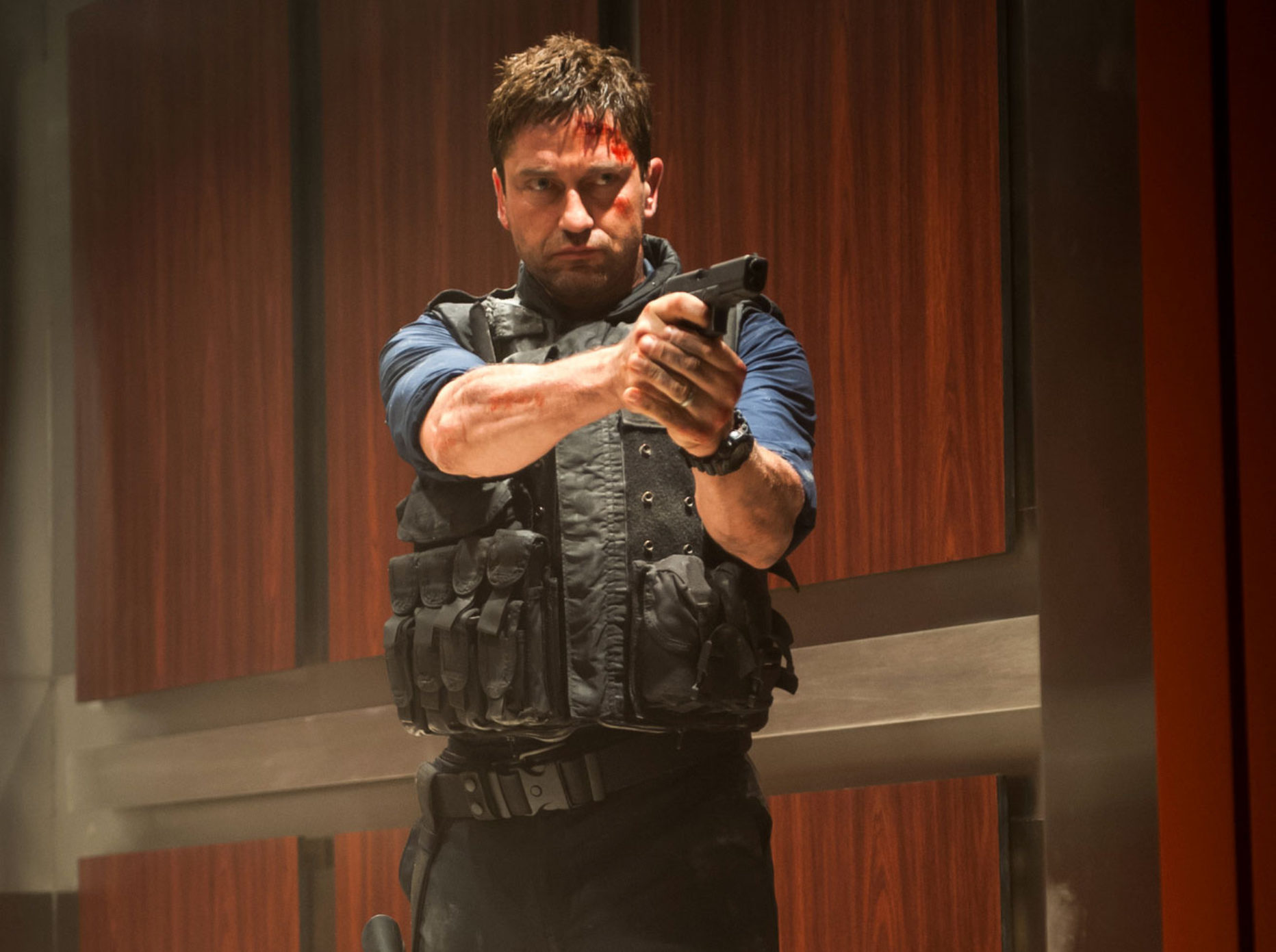 There was a term that circulated around in the 90’s when real action movies were still in hot demand – ‘Die Hard Clone’.  The term was used to describe Die Hard ripoffs where a one man army would take on a crew of specialist killers.  The ingredients all remained the same:  Articulated swearing, copious machine gun fire, a villain just in it for the money and a closely confined environment.  The locale was the only real variation from one movie to the next.  In Sudden Death, it was a locked down hockey stadium.  In Under Siege, it was a nuclear-equipped battleship (excellent premise) and in Under Siege 2, it was a hijacked train.  Then there was one at the White House. It had been too long.
The location:  The White House.  The enemy: North Korean nutjobs.  The One Man Army:  Gerard Butler, who really does strike a few ‘young Bruce Willis’ chords, again.  Put in charge of directing is Antoine Fuqua, the guy who brought us Shooter, Training Day and Brooklyn’s Finest.  This is a recipe for success and a relief for the drought of old school action.  And that’s exactly what we get.  In the movie, Butler is a disgraced Secret Service Operative busted down to a lowly security job elsewhere in the capital.  When the North Koreans attack the White House with an AC-130 (!), and take over it with covert Special Forces, Butler’s former U.S. Ranger is drawn to the chaos like a fly to shit.  With Duke Nukem mode fully engaged, Butler begins dismantling the commies with extreme prejudice.  All this within the first 16 minutes, a time which the enemy boasts of as a remarkably efficient takeover.
Of course, there’s another movie out that year with a near identical premise.  You might even confuse the two, the other one being ‘White House Down’.  Despite it’s similar story, that movie can’t realistically be called a Die Hard Clone.  It is PG-13.  This movie is Rated-R and was clearly designed this way from day one.  Soccer moms may approve of the cookie cutter antics of Jamie Foxx and Channing Tatum in White House Down, but they most certainly will not approve of men being stabbed in the brain, relentless swearing and more bodies than the Vietnam War In Olympus Has Fallen.
There are a few things missing though.  In Die Hard, Rickman was a slick and unforgettable villain.  In Under Siege, Tommy Lee Jones and Gary Busey were the villains. And in a good Die Hard Clone, the hero will take a break from wholesale killin’ and verbally assault his foe with a string of threats and one-liners over the radio, and in return the bad guy will hold his own.  Yune though, while sporting the appropriately manly villainous name of ‘Kang’, is no Tommy Lee Jones, he’s pretty generic.  He’s not charismatic at all.  The movie also loses a bit of its massively kinetic pacing and torque in the second half, you could even call the finale anti climatic.
This movie was a refreshing success for manly movies, and that includes financially. Despite a lower budget and harder rating, it performed better than ‘White House Down’.  Save your money and rent this instead.