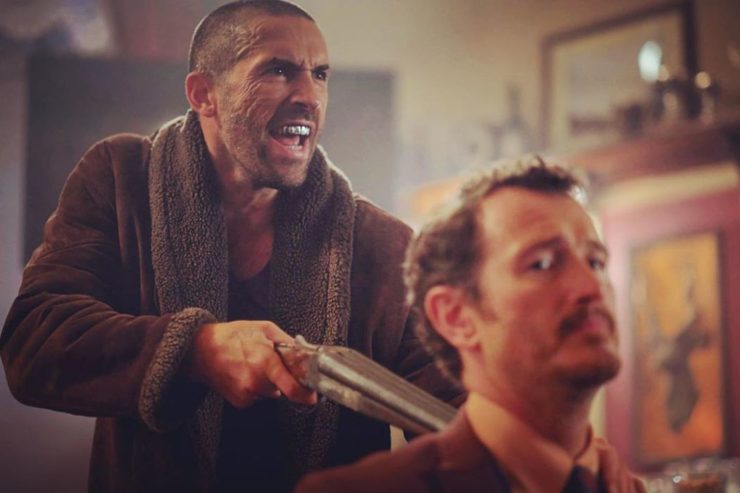 Scott Adkins gives his best performance yet as Cain Burgess. He plays a fighter turned violent convict in the terrific bone-crunching action film, Avengement. After the usual pig slop of overpriced video-on-demand releases, I was thrilled to find this diamond in the muck.

When we first meet Cain Burgess, he’s a brutally scarred prisoner, taken to a hospital to see his dying mother. Unfortunately, she’s already dead. Dejected and angry, Cain takes this opportunity to knock out his police escort and escape. He goes to the Horse and Jockey, a pub owned by his brother, Lincoln (Craig Fairbrass). The pub is the headquarters of Lincoln’s crew. Lincoln is a ruthless loan shark, who bilks the desperate out of their money until they are destitute. In the pub, Cain holds Lincoln’s gang hostage after he pulls out a shotgun. Cain then decides to recount how he ended up in prison and got his scars.

Cain explains that he’s been locked up for the last seven years. He was ex-fighter, who failed to throw a fight and instead knocked his opponent out cold. This cost his brother and his betting friends, much money. Eager to show he could do better, Cain asked his brother for a loan to start a gym. Lincoln initially refused the loan but asked him instead to steal a plastic bag from a random woman. It seemed easy enough for Cain. However, when he took the money, the woman unexpectedly gave chase and got herself run over by a passing car. Cain was quickly arrested and sent to HMP Belmarsh, the most violent prison in England.

In prison, Cain gets stabbed, punched and has acid thrown in his face. Worst of all, Cain gets his front teeth broken after being head stomped. Faced with no recourse, Cain starts treating prison like a fight, turning himself into what he calls, “a hardened rusty nail.” For defending himself, his sentence keeps getting extended, his pleas for transfer or protection fall on deaf ears.

Directed by Jesse V. Johnson, Avengement contains stellar fight cinematography that allows you to see all the action. The film’s core themes are transformation and the will to survive. Cain did not start a killer, but his environment, being stuck in prison full of rapists and murderers, forced him to become one.

The only caveat for Avengement is the strong local accents used in the film, so I would recommend watching the movie with subtitles.

Scott Adkins should be in bigger movies or series, as he has become a gifted and exciting actor to watch. He should have been Iron Fist in the Netflix series or played the lead in a Marvel movie. I was disheartened when I saw him play a mere henchman in Doctor Strange. One can hope that with all the new streaming services popping up, Adkins can land a role in a breakout hit.

Avengement deserves high accolades and is well worth digital rental or purchase.