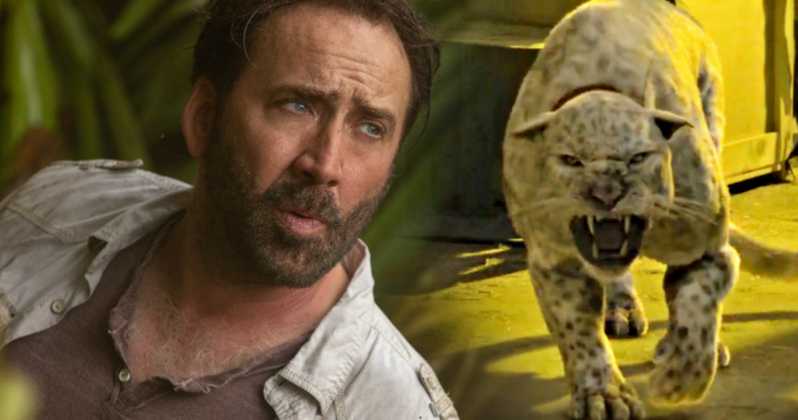 There is a scene in this movie where an inebriated Nicolas Cage confronts Famke Janssen and interrogates her, trolling hard, with acting that would probably be rejected from a Police Academy movie.  It’s probably the best scene in the film because the only thing that make Nicolas Cage movies worth watching these days is the idea that he’ll depart from the theme of the movie and go into business for himself with top tier trolling.  He doesn’t always do it, sometimes you’re disappointed.  Here he does, though it doesn’t help hugely.

Cage plays Frank Walsh, a game hunter bringing back a notoriously rare white panther cat.  The cat has a taste only for human flesh, after we’re informed the otherwise utterly normal locals decided to keep it on a diet of human-only meals (WTF).  Walsh is transporting the animal back home via boat, but also travelling is nutjob killer Richard Loffler (Kevin Durand), being escorted by Paul Freed (The Sopranos’ Michael Imperioli) and Ellen Taloy (Jannsen).  Durand escapes, and lets the cat loose also, with both running amok on the ship, the body count piles up.

The cat by the way is fake (of course it is), using CGI that looks fairly convincing, until the thing starts moving.  The lack of motion capturing is going to make anything look suspect.  Other corners are cut by filming the whole movie, most of it, in a cargo boat.  A lot of cramped corridors and CGI bullet wounds inflicted on the F-rate cast.  These things, with the shoddy writing, are hard to look past.  So the film is not recommended, unless…

… you’re a Cage fanatic and wish to see some wanton trolling.  In this film, Cage made me laugh by simply sitting at a table, eating; the man’s expressions are so often priceless.  But his behavior is also challenged by seasoned troll Kevin Durand, himself playing it funny here, pushing the boundaries, but not too far.  For some, this might be something to get drunk to.

The fight scenes are fucking awful by the way.