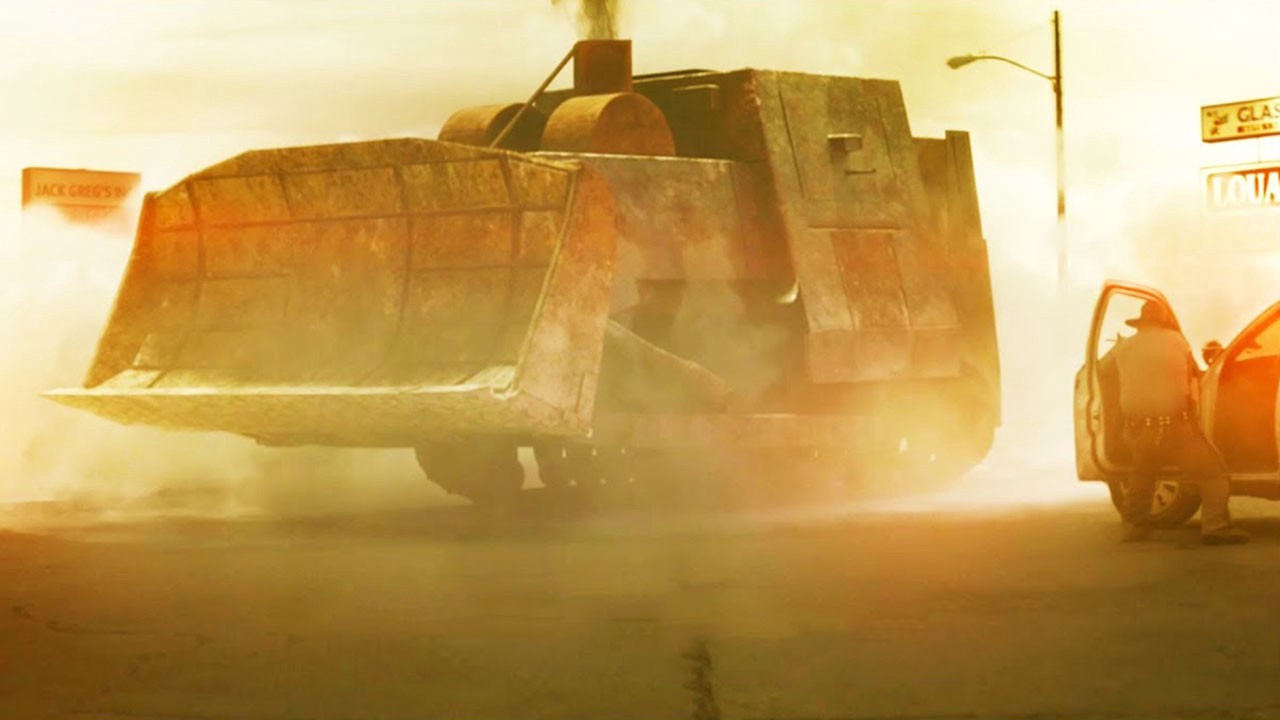 What to Expect:  With Tony Stark-like ingenuity, a man builds an armored bulldozer and goes on a destructive uprising against his enemies in this provocative documentary.

Director Paul Solet’s gripping documentary, Tread, tells the life of Marvin Heemeyer, an ex-welder, and successful muffler business owner.  In a fit of madness and creative engineering, Marvin decided to modify a bulldozer and create what is, in essence, a mechanical beast.

The documentary breaks down into two parts.  The first part is a relatively mundane and boring biography.  Heemeyer’s life in Granby, Colorado, is described through interviews with co-workers, friends, and an ex-girlfriend.  Audio recordings of Heemeyer are interspersed throughout.  The audiotapes feature Heemeyer speaking about his struggle against small-town bureaucracy and perceived rivals.  The second part is the bulldozer’s devastation of the city and reactions from local townspeople and reporters.

The crux of Heemeyer’s dispute with Granby was their zoning decision to place a concrete plant adjacent to his Muffler shop.  Marvin feared it would block his property’s access to a sewer and water line and produce dust and debris.  He protested the decision and sued the city.  Marvin lost the lawsuit, and the town allowed the concrete plant constructed.

After losing the zoning decision, Marvin decided to buy a Komatsu D355 bulldozer at an auction. In 2003, he shut down his Muffler business and sold the buildings on his property to a buyer looking for extra storage space.

Once his property sold, Marvin rented out a building he owned before.  In this building, Marvin stored his bulldozer.  He spent most of 2003, transforming the dozer, covering the machine with steel plates and placing five cameras outside, covered with bulletproof glass.  Marvin also mounted camera monitors inside the dozer.  He would use these cameras to see around him and steer while driving.  Inside, the machine contained an air-conditioning system, multiple semi-automatic rifles, and small holes from which he could shoot.

On June 4, 2004, with his bulldozer’s alterations complete, Marvin went on his rage-filled venture.  Marvin’s targets included the concrete plant nearby, residential homes, and even city hall.  All of which he destroys with systematic precision.  Police and SWAT teams armed with high powered guns and grenades proved futile at stopping this beast of a machine.

Tread as a documentary picks up its pace halfway through and showcases exciting re-enactments of the bulldozer’s carnage.  Director Paul Solet does an excellent job covering a broad range of perspectives in his interviews as well.

Audiences will appreciate the non-judgmental approach he takes.  However, there should have been more focus on the dozer itself, which is the most intriguing part.

Despite an abrupt ending, Tread is a riveting documentary of how a mechanical genius like Heemeyer can go down a crazy and dangerous path.  He should have used his prowess working for DARPA (Defense Advanced Research Projects Agency) instead.