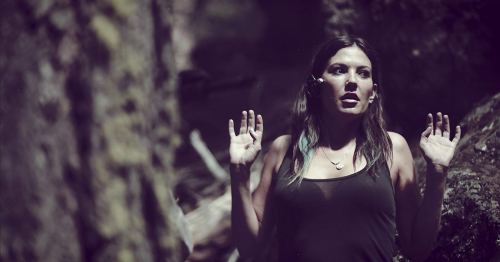 Run Time:  77 Mins
Rated: R
What to Expect:  Assassins, mercenaries, secret societies, topless women and an ax-wielding maniac
One man movie-making machine, Rene Perez, directs, edits, produces, and scores the daring and transgressive exploitation thriller Cabal.  However, dull cinematography, substandard acting, and a short runtime (77 minutes) hamstrings this movie and makes it seem incomplete.
The film opens in medias res with a martial arts fight between a man wearing a ballistic face mask and several well-dressed bodyguards.  The man with the facial armor is an assassin for a mysterious organization and goes by the codename Dragonfly.  His target is an obese mafia boss whom he kills by firing bullets into his torso.  After his target’s death, Dragonfly learns from his handler, Elizabeth, that police are inbound and leaves the scene.
As his handler, Elizabeth provides Dragonfly with targets, information, clients, and warns him of impending danger. Later, she approaches Dragonfly sans mask, at a dive bar. Dragonfly does not appreciate meeting his handler in person, preferring to remain anonymous.  Elizabeth wants to hire him for a mission.  She reveals that women tricked into participating in a photo-shoot at a secluded ranch are ambushed and murdered by a killer called Sallos (Tony Jackson).  A hulking individual who brandishes an ax.  Sallos uses a mask that looks like Freddy Kruger’s Chest of Souls.
A secretive society manipulates and controls Sallos, and extracts the valuable organs from the young women Sallos kills.  This shadowy society is a collection of WASP elites.  They revel in how they have controlled the masses by promoting social policies that have weakened the family structure.  This clandestine group makes Dr. Claw’s (from Inspector Gadget) wicked organization MAD look like the Salvation Army.
After Dragonfly accepts Elizabeth’s assignment after some deliberation, he receives directions to the private ranch where the slayings took place.  Dragonfly aims to eradicate the ax executioner and the deceitful association pulling the monster’s strings.
As an exploitation movie, director Rene Perez adds artificial film dust and scratches digitally, to imitate a vintage film from the 1970s.  This effect is frustrating and distracting. Genre movies do not need to look old to be good.  Many exploitation films from the 1970s and 1980s, such as Seven (1979) and Firecracker (1981), had colorful cinematography.
Cabal could have fared better if the supporting cast were decent.  However, the acting from members of the secret society give performances that would get them kicked out of any local theater group.  Villains need to be intimidating and believable, not stilted, and lazy.
One highlight of the movie is the memorable electronic score by The Darkest Machines.  They create an infectious hip-hop and NewRetroWave score that runs through the film.
Cabal is a low budget affair, one where the actors are also part of the production crew.  Nevertheless, it is tolerable enough and tries to be provocative, a difficult task this current year.  For that alone, it qualifies for a passing grade.