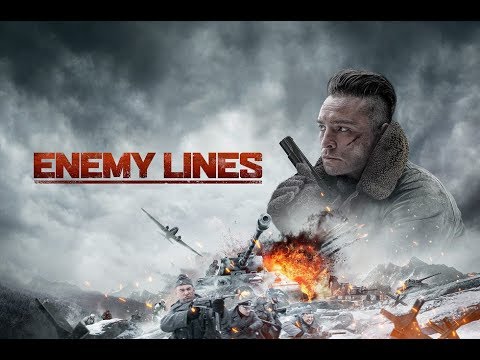 Director Anders Banke has put together a very average World War II action movie in Enemy Lines. This film is not part of the Behind Enemy Lines series. The film stars Ed Westwick (Gossip Girl) and features John Hannah (The Mummy, Spartacus: Blood and Sand) in a minor supporting role.

In 1943, the American High Command was interested in Alexander Fabien, a rocket scientist at one of the Nazi’s top-secret installations in Poland. He is forced to work under gunpoint. The allies want to free him from Nazi control. The plan is for Fabien to be rescued while visiting his wife and daughter at a secluded cabin. General McCloud (Corey Johnson) and Colonel Preston (John Hannah) requisition some British soldiers for the mission. As a British-U.S. operation, the team is led by U.S. Marine Major Kaminski (Ed Westwick).

After arriving on the Polish coast via fishing boat, the soldiers trek through miles of frozen woods. At Fabien’s cabin, the men discover more enemy soldiers are protecting the scientist than anticipated. Regardless, the squad moves forward with a quick, stealth attack by night. Their approach includes hijacking a Nazi anti-aircraft gun to pulverize the guards.

Despite casualties, the mission goes off successfully, with Fabien and his family now under the team’s supervision. However, there is still peril on the horizon, as Soviet commandos are in the area and want to kidnap the scientist. Kaminski and his men must evade the Soviets and journey through Nazi patrolled territory to find their way to an extraction site.

In the mid-80s, after the spectacular box office of Rambo II (1985), film companies in Italy, Germany, and the Philippines began to produce their own Vietnam/Jungle action movies. These companies made films like Saigon Commandos (1988) and Hell’s Heroes (1987). Many of these films featured scenes of men marching through an unending jungle, punctuated by the occasional helicopter flyover and exploding village hut. Enemy Lines is the forest version of one of those movies. Too many scenes in Enemy Lines show soldiers trudging through snow-covered territory, encountering Nazis, Partisans, and engaging in unexciting firefights.

While Ed Westwick tries his best as Major Kaminski, John Hannah gives a disinterested performance as Colonel Preston. It was not very pleasant to see Hannah put in no effort whatsoever when he was so charismatic and scene-stealing as Batiatus in Spartacus (2010).

The overblown score by Phillipe Jakko does not help the film either. His score is melodramatic when it needed to be tense and suspenseful.

Unless you are desperate for World War II inspired action, stick with classics like The Guns of Navarone (1961) or The Dirty Dozen (1967). Enemy Lines is not recommended for digital rental or purchase.