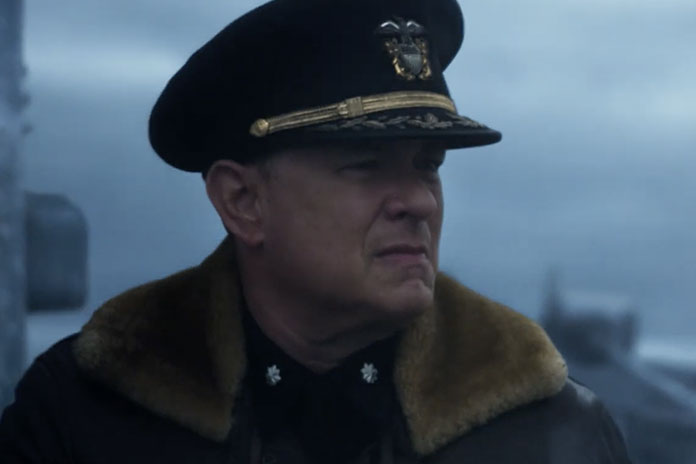 Run Time: 90 Mins
Rated: PG-13
What To Expect: A big budget feel movie, well crafted and beautiful to look at

I had doubts about this film, the seeds of which were sewn by Roland Emmerich’s lousy Midway.  A similar type of movie, Midway would rely heavily on synthetic visuals to recreate a key naval battle of WW2.  It didn’t work, as it relied on trashy looking green screen bombast (instead of using coding craftsmen/artists to accentuate it) and, perhaps worse, a bigger annoyance in the form of Ed Skrein.  While Greyhound also relies heavily on synthetic visuals, there are key differences which make it a hugely superior film.

The film follows  an inexperienced U.S. Navy captain (Tom Hanks) who is leading an Allied convoy being stalked by German U-boat wolfpacks.  As they move deep into the Atlantic, air power is negated and this is where the packs look for blood.  Hanks’ destroyer must act as a quarterback, playing cat and mouse with U-boats and even getting into point blank shooting matches.  The ‘story’ is nothing more than that in this short movie.

Where Midway looked like a lazy PS4 game, Greyhound utilizes seamless ‘screening’ mixed with apparent real life vessels and outright CGI vessels – and all of it is carefully crafted and edited to deliver an immersive film that makes you feel like you’re in the Battle of the Atlantic.  The shark is never jumped for example, just because you can with CGI, it’s all functional.
I had a hard time telling where much of the ‘fakery’ began or ended, which is good – anyone remember Jurassic Park going the same route?  The whole film is functional too, running at 90 minutes, most 80 of those minutes are simply a long running battle.  Speaking of functional, expect that of the dialogue (a lot of naval commands and lingo) and, you know, quite serious acting to go with it. No Ed Skreins treating the whole thing like a joke in this one.

This is to my memory the first Battle of the Atlantic film realized so vividly, there are plenty of post-war efforts, but so many of those are corny and pomp.  Many are complimenting the film’s run time, but my only problem is that the pacing is a bit too quick.  A two hour movie with quieter moments of tension and reflection might have helped, the relentless pace might fatigue some viewers.

Hanks threatens to ram U-boats in a movie with incredible, atmospheric cinematography… what’s not to like?