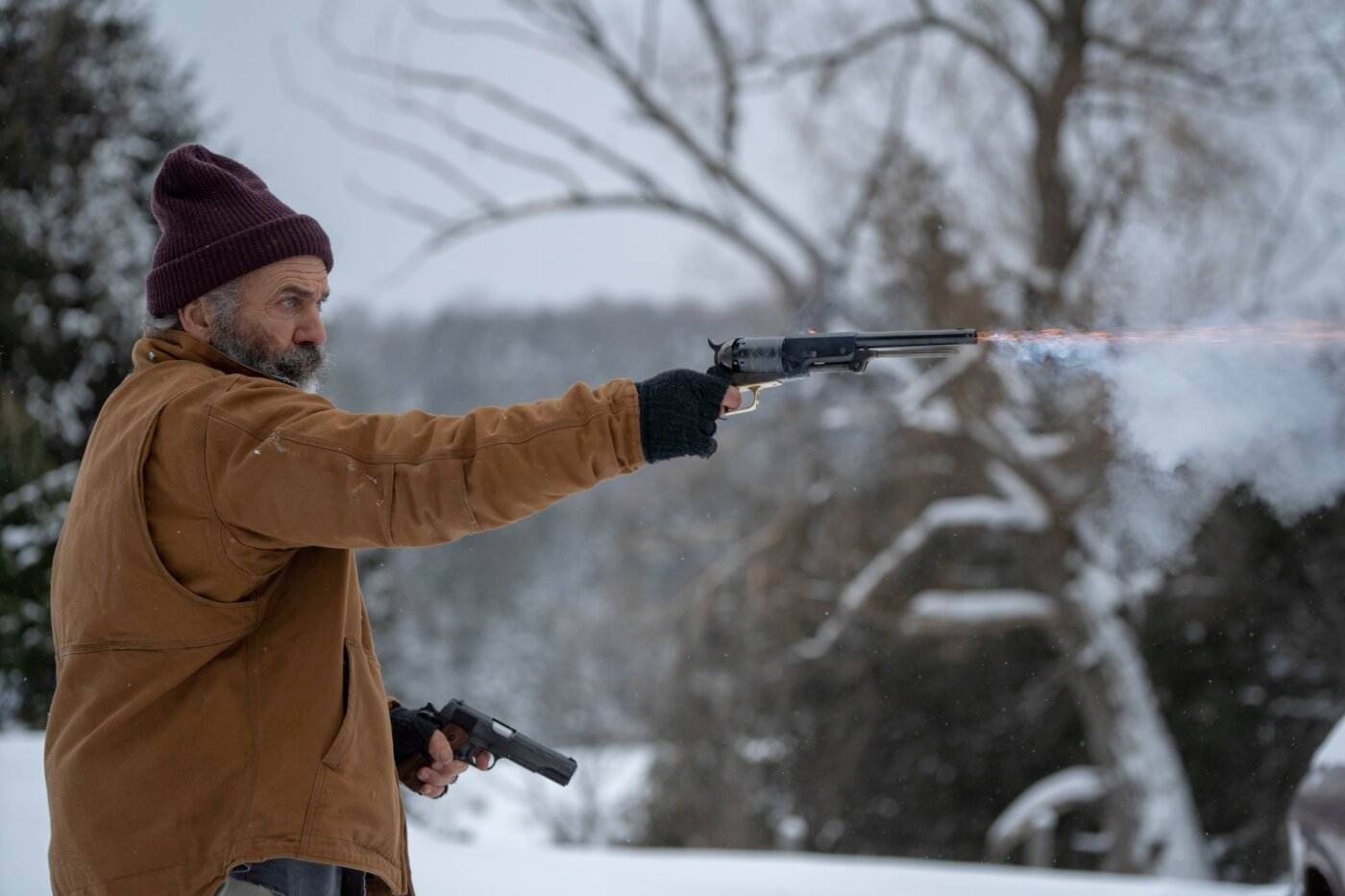 Run Time: 100 minutes
Rated: R
What to Expect: Mel Gibson as a badass Santa Claus in a film we’ll be watching every Christmas season with a bottle of Jack Daniels from now on.

A new Christmas cult classic is born with 2020’s Fatman, an eccentric mix of fantasy, violence and black comedy which will interest those who enjoy quirkier festive flicks like Rare Exports, Krampus or 2003’s iconic Bad Santa. Indeed, rather than a saccharine holiday picture designed to generate warm or fuzzy feelings, writer/directors Eshom and Ian Nelms (Small Time Crime) put their own unique, distinctly dark spin on the holiday season with its assorted traditions and iconography. Fatman is undeniably ridiculous from a conceptual standpoint, but it is effectively executed with a straight face. With its unmistakable grittiness, as well as the underlying cynicism about the current state of the modern world, Fatman is an oddly appropriate and timely festive movie for 2020, and it is worth your attention if the concept appeals to you. Although not perfect, it’s truly refreshing to see a Christmas film with genuine personality and even a dollop of emotion, as opposed to something more formulaic and factory-made.

A spoiled child living a life of luxury, Billy (Chance Hurstfield) secretly exploits the wealth of his wheelchair-bound grandmother (Deborah Grover) to maintain the services of a deranged assassin known as Skinny Man (Walton Goggins). Skinny Man harbours a long-time obsession with Father Christmas following a traumatic childhood experience, and oversees a collection of custom-made gifts from Santa’s workshop. When Billy receives a lump of coal on Christmas Day, he promptly hires Skinny Man to kill Santa. Meanwhile, Chris Cringle (Mel Gibson) has grown weary of the holiday season, as good behaviour is continually on the downturn and fewer children than ever are deserving of gifts. Unfortunately, less presents means a smaller cheque from the United States government, and Chris faces the demise of his Christmas operation as the bills continue to mount. Supported by his loving wife, Ruth (Marianne Jean-Baptiste), Chris has no choice but to accept a contract with the U.S. Military, tasking his elves with building control panels for fighter jets.

Fatman‘s reimagining of the Santa Claus legend is one of the picture’s biggest charms. Rather than a jolly, rotund man in a classical red outfit, Chris is a regular guy who’s just trying to pay his bills and his employees, and who hits a rough financial patch due to his reduced government paycheques. He’s also not immune from the dangers of the outside world, nor is he invisible, as kids occasionally shoot at Chris’s sleigh. Plus, rather than a wondrous or magical North Pole home (à la The Santa Clause or The Christmas Chronicles), Chris lives in a simple farmhouse, and the workshop resembles a mundane factory. Nevertheless, this realistic take still contains fantastical elements, as Chris is instantly aware of everybody he encounters and can recall individual histories in an instant. Fatman hints at a wider mythology at play, but the directors smartly refrain from overtly answering or clarifying every point, leaving viewers to fill in some of the blanks. Indeed, the Santa Claus lore is more fun with a hint of mystery and intrigue, and the Nelms Brothers keep the narrative moving forward at such a confident pace that dwelling on the details would only slow down the proceedings unnecessarily.

This is the first major feature film for the Nelms Brothers, and they exude superb authority over the material; Fatman is a taut, technically proficient endeavour which never feels compromised or cheap, nor does it feel like a low-budget, direct-to-video flick. Additionally, the screenplay bursts with razor-sharp dark humour which is virtually non-stop throughout, from Billy’s sheer ruthlessness to the many quirks of Skinny Man, who adores his pet hamster and takes it on his journey up north. The narrative steadily builds to a marvellous, vicious third-act showdown between Chris and Skinny Man in the snow which draws noticeable inspiration from classic Western flicks, complete with Morricone-esque music. Skinny Man’s brutal siege on Santa’s compound is marvellous, and the Nelms Brothers keep things practical and tangible as much as possible, including blank-firing prop weapons and real blood squibs, both of which contribute to the agreeable aesthetic. Fatman also benefits from a superb, atmospheric, synth-infused soundtrack by the Mondo Boys, which incorporates some familiar Christmas musical notes but sounds wholly unique and original.

Gibson is one of the film’s biggest assets; he’s a superb pick for the titular character, playing a conflicted Santa Claus who seems more like a grizzled war veteran than a jolly fat man. Gibson never mugs for the camera and it never seems like he’s in on the joke, which is precisely why his performance is so effective and humorous. Playing the patently ludicrous material so straight is a risky move, but Gibson sells it all with charismatic conviction, creating a distinctive and badass interpretation of this longstanding cultural figure. Additionally, Chris and Ruth’s relationship represents the heart of the movie, and Marianne Jean-Baptiste is an absolute treat as Santa’s wife. Gibson and Jean-Baptiste share a lovely, easy-going chemistry, and the affection is palpable between the two. Their relationship is not rote or robotic; rather, it’s genuine and heartfelt. Another huge asset is the always-reliable Goggins, who’s downright perfect as the callous, chain-smoking Skinny Man. Goggins is an excellent comedic actor, and he plays the role with utmost sincerity despite the sheer silliness of the material, scoring laughs at every turn. Also of note is Chance Hurstfield, who’s easy to hate as the contemptible Billy, a.k.a. “Little Shit.”

Fatman closes with gun battles and a smattering of fisticuffs, but it is not necessarily an action movie. Instead, the Nelms Brothers create a darkly comedic character study with witty dialogue and sporadic bursts of aggression, supported by an exceptional ensemble cast who consistently hit their respective marks. Additionally, the Nelms Brothers have tremendous fun putting their offbeat spin on the well-worn Santa Claus mythology, and a genuine sense of earnestness permeates the material – this is not a lazy one-joke feature. Admittedly, there are not many plot surprises here (the trailer handily summarises the story), but this is a minor knock against an otherwise highly enjoyable feature. Although Fatman is not a Christmas movie for every taste, it boldly stands out in a sea of sentimental, traditional festive flicks.