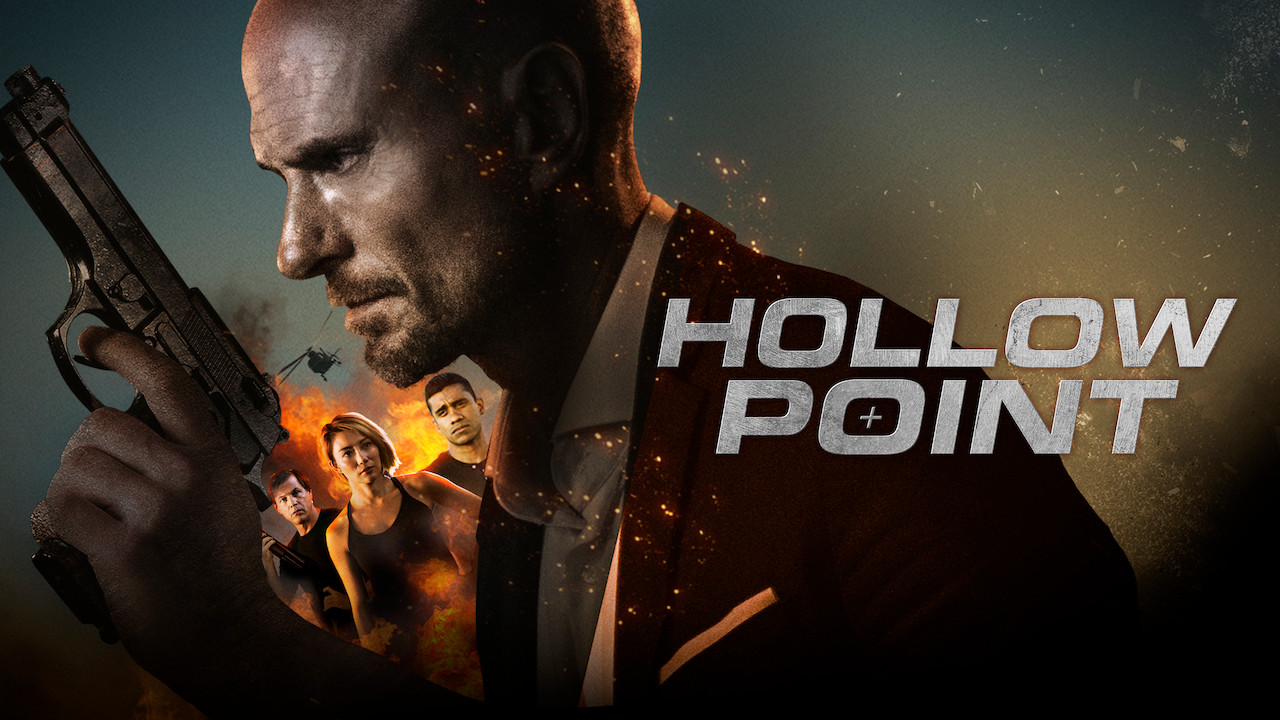 Run Time: 89 minutes
Rated:  R
What to Expect:  An above-average Death Wish type movie.
Daniel Zirilli (Steven Seagal’s The Asian Connection) directs the Death Wish inspired actioner Hollow Point (2019). Despite its conventional storyline, it’s well-paced and coherently told. It features an intriguing supporting cast, including Bill Duke (Predator), Michael Pare, and Luke Goss.
Dr. Nolan Cooray (Dilan Jay) is an idealistic Los Angeles college lecturer teaching law and ethics. He has a pretty wife, Audra (Angie Simms), and a young daughter. Driving home one night, Audra takes the wrong side street. She ends up witnessing a gangland murder. Gangster Vincent ‘Trigger’ Trano (Jay Mohr) sees her vehicle and immediately shoots both passengers, killing them.
Nolan is devastated when he learns of his family’s death. His world shatters in an instant. LAPD detectives arrest Trigger for this heinous act. However, Trigger is soon released from police custody after his associates kill any remaining witnesses that connect him to the crime.
With Trigger free, Nolan decides to take justice into his own hands. He buys a gun and attempts to assassinate Trigger at his home. However, Nolan’s vigilante mission goes sideways, and he ends up being arrested and charged by the police.
Nolan accepts a plea deal and goes to prison for 12 months. He meets Jackson (Bill Duke) in prison, a helpful guard who mentors him and offers survival tips. Nolan also meets Hank Carmac (Luke Goss), a lawyer who decides to take his case and get him out of jail sooner.
After being released from prison, Nolan starts hanging around Hank and his two close law enforcement friends, Amanda (Juju Chan) and Damian (Michael Pare), at a local dive bar. Nolan learns the trio moonlight as vigilantes who hunt violent criminals and rapists who have escaped justice. Once a law-abiding citizen, Nolan now treads a dangerous path in joining Hank’s crew and becoming judge, jury, and executioner.
Rapper/singer Dilan Jay gives an earnest and sympathetic performance and proves himself adroit in action scenes. Also, the always reliable Luke Goss is passionate and heartfelt as the leader of the vigilante squad. As bad guy Trigger, comedian Jay Mohr plays the character as aloof and sadistic. This marks Mohr’s second villainous role after Street Kings (2008).
While the subject matter is not ground-breaking in any regard, Zirilli does his best to keep the story moving forward. Shootouts and fights are well-handled as well.
Revenge/vigilante movies are a crowded genre. Nonetheless, Hollow Point is just entertaining enough. A decent choice for either a digital rental or purchase.