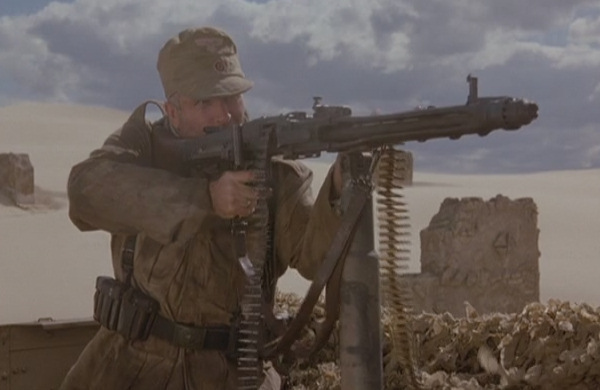 In talking with a friend about Rommel and the Afrika Korps, he mentioned a movie from the 1990s starring Jim Belushi that was somewhat similar to the amazing Beast of War (1988), which happens to be one of the top five war movies ever made.  Similar, in that a tank crew becomes isolated, hunted and pitted against the elements and eventually enemy forces.  It’s called Sahara, a TV movie from 1995 shot in Australia.  It’s one of those rare movies stuck in limbo, too small to be theatrical but almost too good for TV.  This is my kind of movie, the undiscovered competently-made war actioner that just somehow didn’t make it to the big-leagues.  This is probably Belushi’s second (or third) best movie behind Red Heat and Thief as well. Whatever happened to that guy?

So, Jim Belushi’s unit gets annihilated and he, his crew, their M3 Lee tank and a few stragglers have no option but to get out of dodge.  Given their circumstance and position, that means straight into the Sahara desert because they are effectively surrounded North, East and West.  And in WW2, both Allies and Axis avoided the open desert/deep Sahara, too baron, too easy to get lost, too big. Elsewhere, a German brigade is preparing to slam into the side of unsuspecting Allies as they are regrouping, but first need water.  Both Belushi’s crew and the Germans are headed for an isolated well.  Belushi decides to run a suicide mission engaging and holding the Germans for as long as possible so that the Allies who have landed will be better prepared.  I mean, this is fucking cool war shit.  There is no dead weight and character development is written for the sole purpose of killing the person is was written for – needless to say, half the cast get turned into chaffed meat.
You have to expect certain compromises with a movie like this.  It is after all, only a TV movie.  It’s poorly budgeted.  But what a TV movie it is!  This is how TV movies used to be, not some shit filmed in Eastern Europe.  Production values are hardly Band of Brothers, but surprisingly pleasing.  The movie is one part ‘Beast of War’, one part ‘Zulu’.  When it goes into Zulu mode, it starts to suffer a bit.  I mean, since when did German troops perform human waves?

And how did 500 troops get to Belushi’s well on foot?  That being said, for what it is, this is to my eyes one of the best TV movies ever.  I was glad to see Belushi take it deadly serious too.  You get the sense he realises that this is good material in his increasingly shit resume, and does it justice.  Be proud of this one, Jimmy.

A very sturdy B-Movie.  The tank is realistically cared for and there are some genuinely clever set-pieces.  One thing though, Belushi looks remarkably well fed for a North Africa Veteran…