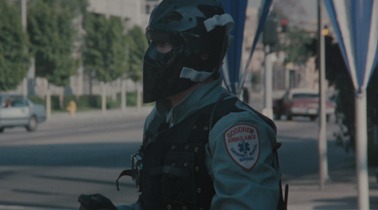 This is the best film of the 1990s.  And that’s kinda saying something because the ’90s were massively superior to the comic-book riddled ’00s,  It’s even better than ’90s classic Terminator 2.  It is the perfect amalgamation of the right cast, directed by the right man with the right story.  Ever notice in movies these days every man, woman (and child) holds a firearm like he’s just did 4 tours with the Navy Seals?  Even though he’s just a civilian?  It may not make sense, but it looks cool.  And Heat was the first to introduce that to the mainstream.  Before Heat, everyone in the movies shot from the hip. How often have you heard ‘Double Tap’ before 1995?  That’s not the only thing this masterpiece pioneered.  Take your fucking pick, everyone wants to copy it – even now.  Which postmodern classic was Christopher Nolan trying to rip off in his (failed) attempt to tone ‘The Dark Knight’?

This movie has cool men doing cool things.  A highly disciplined crew going after highly valuable targets. The casting of De Niro and Pacino is perfect.  If anything the support (Kilmer, Sizemore, Trejo, Voight) are even better.  They each exhibit a McQueen-level of coolness.  Even when Pacino is on screen, I want it to return to De Niro and his gang.  They’re in their element and I want to see what they’re going to do next.  Like I said above nowadays everyone in any movie acts like SWAT around a gun, you name it, every Joe Bloggs is suddenly squaring his stance etc.  But here it’s convincing.  The way that De Niro and his men move is professional.  This isn’t just thrown in there to mimic something cool seen in another movie, this is the movie. Their precision and co-ordination suggest that they’re probably an ex fireteam or whatever, though this was never mentioned in the film.

The heist scene is something to behold.  Even Mann himself can’t replicate it – the thrill never really materialised again in Public Enemies.  It’s probably the best shootout of all time.  Even the robbery that preceeds it is realistic (I.e. quick, to a point – in then out).  Every discharge resonates off of the city walls. I’m sure any filmmaker watching this at the time asked the question:  Why only now have real gunshot sounds only just made it to the cinema?  I love how Mann cuts off all music during these sequences as well.  This kind of thing is a turn-on just to listen to and should not be interrupted.  It’s not just the action sequences that are like this either, the whole movie is just covered with a blanket of cool reserve.  If you’re into ballsy cops n robbers then you probably, ever, won’t see better than this masterclass of understatement.