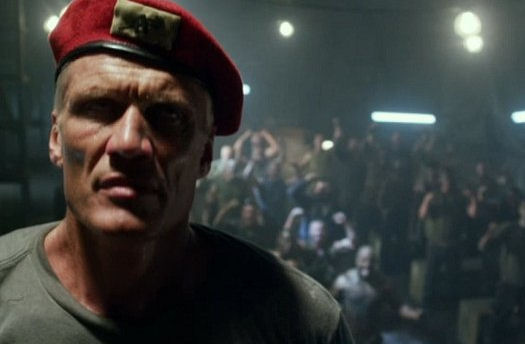 Universal Soldier:  A Day of Reckoning is a mean and nasty psychological thriller with a streak of incredible fight scenes running up its back. Its directed by John Hyams, who gave life back to the franchise with Universal Soldier:  Regeneration.  That film was possibly the most effective DTV ever, a rough yet effective action movie where a skilled director makes the best out of a low budget.  Here, Hyams returns with a larger budget and American shooting location – but unfortunately with less Van Damme and Lundgren.  Its not really a sequel, and in a way its not really even an action movie.  Its a standalone story-driven ‘episode’ using characters and ideas from the previous movies as a base.  Its an experiment and departure.  In some ways it works, in some ways it doesn’t.

A lot of people won’t like this movie, especially people only vaguely familiar with the franchise (Say, someone who has only seen the first movie).  Its in a little world of its own.  Van Damme (Extended cameo, sadly), the original UniSol, has gone rogue and sets up his own cult/militia made up of former and current UniSol’s, all hell bent on going to war with the Government that used them as servile slabs of meat. Without spoiling the movie, Scott Adkins somewhere fits into this dispute and has his own score to settle.  I liked the concept tried here, but only after it explains itself – its all over the place untill a swerve/twist puts all the pieces together, something that almost comes too late and at (almost) too high a price.  In the meantime and leading up to that finale, there’s a lot of dead weight and Adkins, the main character, does a lot of aimless wandering.  But he also does a lot of fighting, and Jesus Christ, in that regard it is something to behold, even for an Adkins movie.

While Adkins is driving around scratching his head (Adkins’ acting ability is the only thing to make these scenes work, just), fight scenes are injected every now and again to keep the pulse of the movie alive.  And again, they really are fucking incredible, the best fight scenes you’ll find outside of The Raid (A definite influence on the action of this movie) or Ong Bak.  There’s a gravity to these brawls and martial arts fights that Hollywood just can’t seem to compete with.  They’re better than Universal Soldier: Regeneration, the editing is superior and choreography refined.  Scott Adkins is an incredible talent and his agility is photographed perfectly.  The fight scenes in US:ADOR will almost certainly be instantly rewinded and played by anyone watching them.  The finale is a blowout of ballsy action, its The Raid with Super Soldiers, go figure. Nothing else in 2012 has or will match the action of this finale. Pair that up with the ‘swerve’ that occurs next to it effectively giving a movie that struggled to find itself heart and value.

The real worth of this movie will ultimately be its replay value.  It fucks around with a concept that is maybe out of its league, but it may lose some dead weight wasted on building its twist on 2nd viewing, if not, it still has the best fight sequences since The Raid.