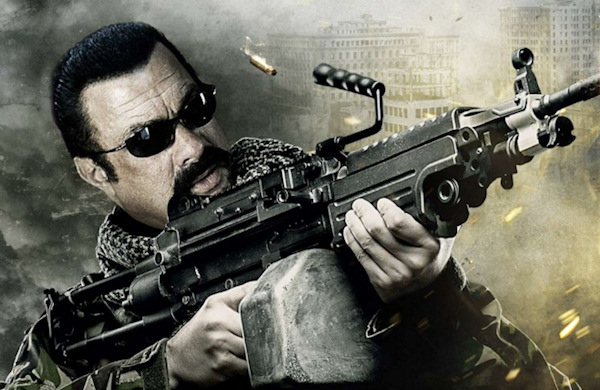 Runtime: 101 Mins
Rated: R
What To Expect: Poor as a movie, good as a Steven Seagal DTV

I’m not one of those people who takes aim at Steven Seagal and his movies just for the sake of it.  While some see him as an asshole, I prefer to think of the Sensei as… eccentric.  And that includes his movies, even the DTV ones with horrible names like ‘A Good Man’.  I’ll give his movies a fair shake and to be fair ‘A Good Man’ is one of the better Seagal DTVs.  I realise that isn’t saying much considering Seagal’s ruined resume, and in fact this essentially is not a good movie.  But I expected to watch this movie either laughing loudly or groaning miserably or both, neither happened.

This movie is a basic story of vigilantism.  Steven Seagal is a former mercenary (yeah, I know) who has moved into a building in Eastern Europe where a young woman, also residing, is the target of Chinese and Russian mobsters.  Naturally, some pissants are due to get their wrists bent and their heads smashed through door panels.  In fact Seagal starts killing truckloads of mobsters with a samuari sword, because he also has beef with the Chinese mob leader.  The fact is, this premise should be horrendous stuff but it strangely remains mediocre, more or less, just inoffensively dull. If it was really bad, I’d rip it a new one.

One thing I like about Seagal especially in recent movies is his weapons control, it’s disciplined and professional.  Now say what you will about Steven Seagal, but few actors, even big league pissants who get some weekend weapons course for a movie, handle their weapons in film like Steven Seagal.  It’s the little things that count.  For instance, in the beginning of this movie, Steven Seagal and a comrade are engaging in some room clearance.  Seagal never points the barrel of the gun at his fellow cast member, even in quick turns, he points it at the ground.  Anyway, as for the fight scenes in this movie?  Director Keoni Waxman films a steady fight scene, they’re so-so however.  But a so-so fight scene where you can appreciate what’s happening is superior to Jason Bourne fight scene with unintelligible vigour.

The main problem with this movie and the main thing that prevents me from giving it a 6/10 as opposed to a 5/10 – it’s too long.  Instead of 100 minutes it should’ve been 85 minutes.  Working on a budget, with poor resources, weak acting and a dull locale, you have to respect that your audience is going to fatigue faster.  Waxman tries to compensate the former by upping the ‘thriller’ ante and overwrites the end.  Big mistake.  Victor Webster’s story arc lengthens the movie too much, his character should’ve been cut but probably couldn’t because he’s there to make up for Seagal’s lack of screen time, which is about 50% of the movie.  So they’re in a no-win situation.

Only hardcore Seagal-ites need look at this.  Otherwise, it’s best to avoid it.  One last thing, classic Seagal-ism appears at the very end.  Seagal is in an intimate scene with the girl, 40 years his junior.  Seagal sits on the edge of the bed embracing the now naked girl, fully clothed and and even wearing his favoured 3/4 overcoat.  Yes.