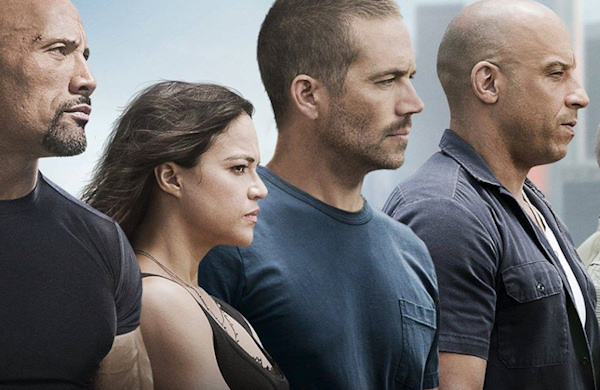 Some developments of note here for Fast & Furious 7 today.  The movie has been renamed, now titled simply “Furious 7”.  A new poster/banner has also been revealed showing the main cast, at least the good guys. They look sombre, which reflects the change in tone for the latest sequel.  The movie is said to be darker and almost a throwback to the ’70s thrillers of old.  It is a revenge flick after all with Vin Diesel and co. out to avenge a friend, murdered by villain Jason Statham.

Also, expect the debut for the trailer around this coming Friday.  It should be good.  We’ll have an exclusive review lined up closer to the movie’s release in April 2015 with co-villain Tony Jaa.  Official outline, questions can also be submitted on social media as well:

The road to FURIOUS 7 starts here.

Because of our fans, our saga has grown bigger and better with every chapter. In just 7 days, we will reveal the first trailer for our next installment – FURIOUS 7 – at The Road to Furious 7: Trailer Launch event at Universal Studios in Los Angeles!

We want to share this moment with all of our fans around the world. For those of you not able to attend in person, you’ll be able to follow a live broadcast starting at noon Pacific on the Fast & Furious Facebook page and on E!. For those in the Los Angeles area, tickets will be available starting tomorrow, October 27th, on the official Fast & Furious social pages.

Starting today, you can submit questions for Vin Diesel, Michelle Rodriguez, Jordana Brewster, Tyrese Gibson, Chris “Ludacris” Bridges, and Jason Statham to be answered at the live event. Go to Instagram and submit a video, asking your favorite Fast & Furious star our question while using the hashtag #AskFurious7. Or, simply write your question in the Comments section below. Your question could be answered live on-air!

For our extended FAST & FURIOUS family, we have set out to make the very best movie yet. We are excited to continue our journey together.

Here is the new banner!