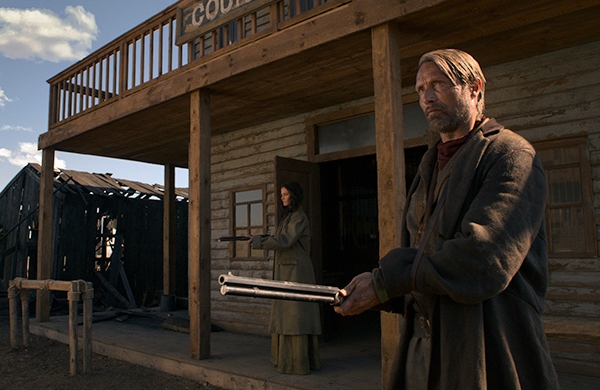 Runtime: 89 Mins
Rated: R
What To Expect: A small yet gritty and ruthless western

This movie flew silently and speedily under the radar this year.  I missed it and wasn’t even aware it existed until someone pointed it out on our Facebook page.  This is a Danish production, shot in South Africa.  And as far as projects like that go with a $10,000,000 budget it is impressive.  It’s a bit formulaic, but the formula is revenge, usually a premise that is too manly too fail.

Mads Mikkelson plays the understated Danish immigrant, Jon, who brings his wife and son from Denmark finally to his place of work in the USA to settle.  Before they even arrive at their new house, the wife is raped and killed his son also murdered.  Jon quickly metes out vengeance by gunning down the varmants responsible, but is unaware that one of them is the brother of a brutal gang leader, Delarue, played by Jeffrey Dean Morgan.  Delarue has a history of murder and torture, and he wants Jon taken alive – go figure.  Even Eric fucking Cantona is one of Delarue’s henchmen.

This is an efficient movie, with no gassy or pointless dialogue.  But its main selling point is its coldness, with Morgan’s villain in particular being one of the most convincing western villains I’ve seen in a while.  Men, women and children and even the elderly and not safe in this movie, largely down to the leading killer, played flatly yet effectively by Morgan.  The movie is brisk too, aware of its limitations and cuts thing down to a trim 89 minutes, while showing off the impressive South African deserts, and, the even more impressive Eva Green.

Some compromises have to be made, such as some suspect (okay, fucking awful) CGI blood and fire, think Expendables 3-style quality – imagine saying that for movies on such different prodction scales.  But come on, the movie shoots and scores.  A strong cast handling tried and tested subject matter.  And nice to see the Danes get a reference for their time in the development of the USA too.