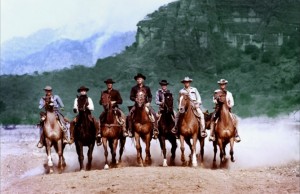 Runtime: 128 Mins
Rated: NR
What To Expect: One of the best American Westerns of all time

It’s strangely appropriate that John Sturges’ The Magnificent Seven is a Western remake of Akira Kurosawa’s Japanese epic Seven Samurai. After all, Kurosawa has repeatedly said that his work is inspired by American Westerns. While The Magnificent Seven cannot compete with Seven Samurai in terms of visual dexterity or profound thematic complexity, John Sturges’ Western-ised adaptation holds up as a rousing action-adventure story as well as a fascinating turning point in the history of films about the Old West. Not only does The Magnificent Seven contain a pitch-perfect cast and a satisfying amount of exciting, gun-slinging action, but it additionally finds time to explore deep contradictions of the mythic noble outlaws which proved so endemic to the American Western genre.

The plot is a simple one, and follows the template established by Kurosawa’s Seven Samurai. A small Mexican village is repeatedly raided by a bandit gang led by the menacing Calvera (Eli Wallach) who constantly leaves the villagers destitute. Desperate and fed up with living under Calvera’s thumb, several of the villagers travel to a nearby border town in the hope of purchasing guns to defend themselves, but end up simply hiring professional gunmen instead. A total of seven men are recruited, who travel back to the village to confront Calvera and his gang of bandits. Each of the seven men has their own reasons for being involved, but all are united under the common goal of removing fear from the village and overthrowing the evil marauders.

The Magnificent Seven is divided into two distinct halves. The first chronicles the rounding up of the seven gunmen, while the second half recounts the epic battle fought between the gunslingers and Calvera’s gang of bandits. Taken at face value, this is standard good vs. evil stuff. But if scrutinised further, one will uncover something much deeper. Sure, the good guys fight off the bad guys heroically, but each character is imbued with a finely-drawn, distinct and interesting personality. The gunmen are masterfully humanised; they’re tough guys who have regrets and fears, but manage to do a commendable job of hiding them. Things steadily intensify during the lead-up to the final showdown which displays no mercy even towards the film’s most likeable characters. The Magnificent Seven also remains vital and interesting due to departures from the genre norms it opted to take. This was probably the first Hollywood Western in history to delve into the emptiness of the life of a gunfighter; they’re confident in their profession, but are unable to hold down a stable home and family life. In a wonderfully judged scene, the seven men discuss the pros and cons of the life they’ve chosen, and it’s apparent this life hasn’t greatly rewarded them since they were poor enough to accept this job for which they’ll receive little pay.

Of course, The Magnificent Seven wouldn’t be considered such a success on characters alone; there are rousing action sequences here as well. In this respect, much of the credit belongs to director John Sturges, an ‘outdoor’ director who keeps the pacing efficient and has an eye for action set-pieces. Prior to The Magnificent Seven, Sturges was experienced in directing both action films and Westerns with such titles as Gunfight at the O.K. Corral and Bad Day at Black Rock. It’s due to the director’s extensive experience that when the action happens, it’s taut, motivated and convincing, with a strong sense of urgency and a clear notion of what’s at stake. The expansive vistas of Western scenery, the codes of honour among the gunslingers, the camaraderie they find in each other, as well as the shootouts so common in Hollywood Westerns are all included here in spades. This fusion of so many irresistible elements raises the film several notches above more typical tales of simplistic cowboy heroes.

Yul Brynner was initially suggested to direct this movie, but Sturges ended up getting the job. Instead, Brynner settled for one of the protagonists – an excellent alternative, because Brynner’s performance is outstanding. Another inspired casting choice is Steve McQueen as a member of the titular team. McQueen, who eventually went on to star in Bullitt and The Great Escape, imbues his performance with cool and intensity. He was the ultra-cool male film star of the 1960s, after all. The other five champions of the film are James Coburn, Charles Bronson, Robert Vaughn, Brad Dexter and European film star Horst Buchholz. It’s easy to see why these men were cast: all have unique, memorable faces that convey both conviction and desolation. A number of actors got their big breaks in this film, including Steve McQueen, James Coburn and Charles Bronson. It’s funny to imagine these actors being relatively unknown at the time. It’s also interesting to note that there was a tremendous rivalry between the actors, in particular between Brynner and McQueen. Meanwhile Eli Wallach is superb playing the menacing, no-nonsense villain. Too many movies allow the lead villain to remain two-dimensional, but this is not the case here.

Upon close examination, there are no real flaws to point out within The Magnificent Seven – it’s just flawed in the sense that it feels like an abridged reiteration of Seven Samurai. Other than that, the film is top drawer. It offers drama, strong characterisations, clever writing, action and suspense. It’s exciting, witty, smart and sometimes even sweet. Added to this, it’s a Western actioner that crosses the line to appeal to movie-lovers of all sorts. Deep down, you know it’s not as brilliant as Kurosawa’s Seven Samurai…but very few films are.