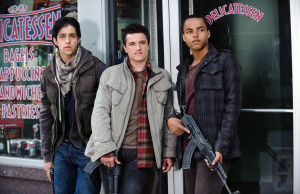 Red Dawn is a tale about a bunch of metrosexuals, cheerleaders and supermodels resisting the combined forces of Russia and North Korea.  Or generally speaking, just North Korea.  Originally, it was supposed to be the Chinese, but in a gutless act of cowardice the studio changed it to North Korea, with some Spetznaz. Now if you didn’t wonder how China, with one aircraft carrier, might invade a continental superpower, then you’d surely wonder how North Korea could do it.  Or more to the point, why North Korea would want to do it.  Well, you’ll still be wondering after this, because this movie doesn’t bother with the whys or hows.  Making sure the cast was Bieberish enough was priority.

At least the original movie took the time to outline just what was happening strategically.  But then, John Millius wrote that, he had nothing to do with this movie.  In short, this is the American version of Tommorow When the World Began, when the cast of Neighbours and Home And Away conditioned their hair in the morning then fought wars in the evening.

You’d think that a movie about killing Commie invaders would be awesome.  Shit, it was in the original movie.  But that movie had Patrick Swayze, Charlie Sheen and the inimitable Powers Boothe.  Here, the cast is so annoying, so cookie cutter, so gay that… goddamnit, I was willing the Red Invaders to slaughter them at dawn.  Thor from The Avengers takes a bunch of 17 year old supermodels into the woods.  Two days later, they emerge as a deadly fireteam and annihilate enemy personnel in every engagement.  These ‘engagements’ are a hilarious sight to behold.  The Wolverines go in all guns blazing, without so much as an afterthought as to a safe, tactical approach.  And the enemy dies, all guns blazing, without so much as an afterthought as to standard operating procedure.  Weird.
Take that pic above, how can you just stand around looking gay with an AKM during martial law?!  And after a hard days fighting, it’s back to the shack in the woods which has, presumably, hair conditioner and fashion items to pass around.  Even after an artillery bombardment on their camp, they all come out with perfectly styled hair and, more laughably, not remotely shaken.  Now in Band of Brothers, airborne troops have their souls rattled when artillery hits the trees around them.  See a problem here? I can also tell you that if you find the location of enemy partisans, you don’t fucking attempt to obliterate their camp using arty, you send in your special forces to capture them. So that you can interrogate them. Trust me on that. John Milius got it.

In one scene, Jeffrey Dean Morgan shows up.  He and a few other Marines run into the backwood metrosexuals.  The metrosexuals, one of whom is apparently Tom Cruise’s actor son (I’m assuming that is the gay(est) looking one, who also looks like Cruise), get the drop on the Marines, not knowing who they are.  The Marines then request the help of the Wolverines in fighting the invaders.  Now come the fuck on!  Marines, asking for cheerleaders (!) help.  The fuck outta here!  If you look closely in this scene, Jeffrey Dean Morgan has a hard time keeping a straight face.  It’s just so fucking shit… do you laugh or cringe?

This is one of the differences from the original movie.  When Boothe meets the Wolverines, he pulls rank and assumes command.  He’s a Captain, a professional fighter.  And they let him.  Then there’s the action in this remake.  It’s soft assed shit.  And you can’t even tell what the fuck is happening.  Shaking cam.  Spazzed out editing.  Why bother?  The cast of this movie makes the Backstreet Boys look like Sons of Anarchy.  Josh Peck looks like the epitome of mextrosexuality, a manicured pansy.  Resistance soldier?  If Communist troops spotted him and his friends coming at them, they’d take them aside and rape them.

This would’ve been a cool movie, had it been made for adults. Imagine something like The Hurt Locker meets the original movie.  Good job fucking it up.  It’s barely even laughable.