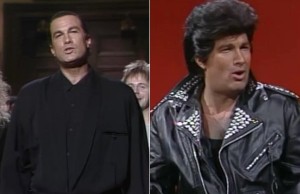 When Nicolas Cage was once a guest on Saturday Night Live, he asked Lorne Michaels if he was the worst to ever appear.  Without hesitation, Michaels said that by far, that accolade belonged to Steven Seagal.  Recently, David Spade again said the same thing, that Steven Seagal was the worst Saturday Night Live host ever.  Not only that, but Seagal was so difficult to work with, writing such terrible skits, that they attempted to pull the plug on the entire thing before it aired.  And while Seagal won out and got his episode on TV (thank God), he was subsequently banned from ever appearing again.

Seagal’s work was considered so bad that SNL censored the episode when it offered the season via streaming on Netflix.  Truly, it lives in infamy.  Not only in televised history, but perhaps in all of human history.  Years ago, 2009 I think, as a devout student of The Master, I finally was gifted this episode on DVD-R.  I checked it out again recently.

The episode, written mostly by Mr. Seagal, opens with an assault on Arnold Schwarzenegger.  Two jabronis are on stage with pillows stuffed up their tops and sleeves, to mimic caricatured muscles.  They speak trash in German accents and hit us with heavy insinuation and innuendo that Arnold Schwarzenegger is, probably, a homosexual. Seagal comes out behind these guys, finding the whole thing amusing, then declares that his movies are superior and unique.  And that they’d better start obsessing over Seagal instead.

After that, we hit the intro credits, the usual SNL stuff.  Now, Sensei takes the stage and introduces himself.  Seagal is operating with a heavy New Yoik accent (NYC crowd, obviously),  apparently without a hint of irony, and launches  an opening diatribe about how the modern man is no longer a warrior and that he’s sick of political corruption.  Seagal asks his audience to be patient with this brief departure from SNL humour.

Seagal then asks the crowd, how about a song? A man comes into the screen and hands the maestro a guitar, as backing vocals are provided by some men – one of them a clearly bemused Chris Rock – something in itself indicative that this is no normal entertainment show.  Mr. Seagal then sings ‘everybody was kung fu fighting’.  After this is done, we then cut to a ‘skit’ about a funeral home college, where undertakers are taught, strictly, not to have sex with dead bodies. The SNL crowd gasps a gross-out, shocked volley of laughter. What the hell am I watching? You want a literal description? Cut to a man mounting the corpse of a female.

Later, a skit begins where ‘Nico’ is attempting to photocopy some paperwork in the office of the local police department. Rob Schneider is a detective sitting near Seagal being extremely obnoxious, or basically… just Rob Schneider.. And then, almost as if we’re not even acting, Seagal says to him in deadly serious fashion: ‘Do me a favour, shut up. Right?’ As Schneider continues being Schneider, Sensei declares. ‘I’m not in the mood for this, nah’m saying?’ Before smashing Rob Schneider’s head violently through the photocopier.  Good job, Steve.

Terrible singing is introduced by Michael Bolton, between these performances.  Whether Bolton was trolling and also attempting comedy, or is truly that bad, I cannot say.  I’m not familiar with the man, but I’m sure it added to the notoriety of the episode.

One of the other memorable skits then begins, with Chris Rock playing a black talk show host (described as ‘so black he sweats oil’) who hates white people. Sensei Seagal comes on as a guest. Speaking in an even heavier Noo Yoik accent, he is smoking a cigarette and dressed like Fat Elvis. I think to myself, who is he mocking here? Elvis did not have such an accent. Then it hit me, Seagal is shitting on Andrew Dice Clay, a man only people of a certain age might vaguely remember, another banned SNL host, who was deemed too sexist to remain a celebrity. Seagal sits in the guest’s chair berating Dice’s lack of a film career, as the audience is unsure what the hell they’re looking at and whether or not Seagal is being serious. Students will get it though, even if they don’t, this is comedy gold.