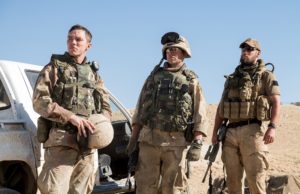 Looking for something to watch on Netflix during the weekend I came across this title. I did not know what it was and I had not seen a trailer for it. I read it was a war movie and since I had not seen one in a while I decided to watch it. I already had a Big Angus Beef Burger in the day, so watching a war movie afterwards was a good manly time spent.

The title role is played by Hoult and in it he plays a guy who just join the military so he can get some college money but is no way cut out for war and as a matter fact, he breaks his hand so that he will not have to go on tour.

This movie has to be judged, I think, a little bit under the circumstances that it was made and clearly those circumstances  came as a result of the film not having a big budget.  The movie still at the end of the day, is a TV movie. For example, the story takes place mostly in 2003 in Afghanistan and you can see M-60 tanks on screen being use obviously because the producers were not able to afford anything else or more modern tanks. So that is just one of the examples that you’re going to have to ignore when watching this film.

However I have to say that I like the movie. It’s not a masterpiece, it’s not great, it’s not “Saving Private Ryan”, “Full Metal Jacket”or “Platoon” for example. It’s a low-key movie and it’s mostly about the journey of the title character and how he goes from a wimpy Soldier to a guy that finds a cause in a war in which he did not wish to go. The story focuses mostly on the efforts of a group of soldiers trying to put running water back into a region and the struggles that come with it.

I like the performances in the movie, Henry Cavill AKA Superman actually was good in it & I wished they’d done more with him. Marshall-Green was another standout and Hoult carried the movie well. I also appreciated the fact that there was no fucking shaky cam!

I actually think that some viewers may not like this movie because of the pacing. The film can be  very low-key at times and some viewers may find it boring. But if you are in the mood to watch a war movie and you got some time to kill and you don’t have high expectations, this movie might do the trick.