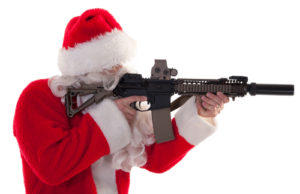 Christmas is almost upon us gentlemen and while I already watched “DieHard” twice this past week cause it’s been airing on Cable TV in the United States this month and it’s just one of those movies that no matter how many times you have seen it, if you’re channel surfing and you stumble upon it, you just watch it because it’s the right thing to do and aside from banging your girl is the manliest thing to do.

There some great Manly Christmas Entertainment out there, such as “Die hard” like I just mentioned but also it’s sequel “Die Hard 2: Die Harder” plus “Lethal Weapon”, “Rocky IV”, “Bad Santa” among other Christmas classics for real men to enjoy.

But as we get together with friends and relatives this holiday season we come to the frightening realization that a lot of people we share our DNA & our lives with don’t have our taste in movies. I mean as I sit here amongst some of my relatives, I look up on the TV and I see “The Hallmark Channel” is on and some girly Christmas movie is airing and I don’t want to watch that shit. I want to eat red meat, drink an alcoholic beverage and something manly on the screen to be playing, airing or streaming.

So this holiday season maybe it’s our responsibility to bring attention to some lesser known or underrated Christmas Manly Entertainment. So before one of your relatives or significant other forces you to watch something like “A Very Inclusive Transgender Holiday Special” Here are just some wonderful Manly Christmas Movies to watch instead: 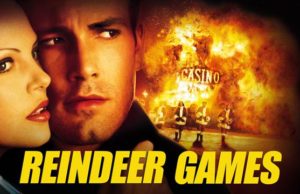 A lot of the movies I’m about to bring up were not really box office successes but nonetheless I like them and in my selfish manly mind that’s all that matters at this moment. They say the holiday season is the season to be sharing & God Damn! If you’re a real man you don’t want to share the remote!

The first on my list is the John Frankenheimer movie “Reindeer Games” but in this case I will recommend the director’s cut.

The movie was supposed to come out in December of 1999 but due to some poor test screenings, the film was pushed back a couple of months and it was released in the month of February of the year 2000. The theatrical version ran for a 104 minutes and as to be expected a movie of this nature got shit on by critics. But John Frankenheimer later on got to release his version on home video which is almost 2 hours and is an improvement over the theatrical one in my opinion.

The story is about a convict about to be released from prison named Rudy Duncan played by Ben Affleck. Now I know Ben Affleck is a polarizing figure like me in my family gatherings but I’ve never hated him. I know he sometimes came across as a douche and here he doesn’t reach the level of Manliness like in his portrayal of Batman in “Batman vs Superman” ( I for one think his Batfleck in that movie was great ) but nonetheless he’s effective enough in the role. His cellmate had a penpal whom he was going to hook up with upon his release by the name of Ashley played by the hot piece of ass Charlize Theron ( #Sexist, #DontCare) but after his cellmate gets killed in prison he decides to pose as his cellmate and hook up with Ashley. Even though he did not want to make the same mistakes again after being released from prison but as we all know pussy (specially hot pussy) makes us men do stupid stuff & Rudy poses as his deceased cellmate Nick and goes away with Ashley.  But then her bad brother Gabriel shows up played by the always reliable manly man Gary Sinise along with his gang of criminal friends & they want Rudy thinking he is Nick to provide them with the “in and outs” of a casino where Nick once worked cause they want to rob it.

“Reindeer Games” was the last theatrical movie of the great John Frankenheimer. Little trivia, Vin Diesel was supposed to be in this movie as part of Gabriel’s gang but he left to do the first “Fast and Furious”. 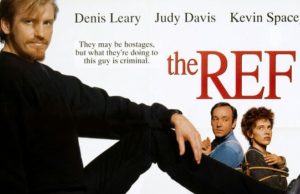 “The Ref” is a funny christmas movie from 1994 that I’ve always enjoyed. MTV was great in the 80s & us 80s kids were glued to our TVs watching music videos & I like many kids from that era, dreamed of 1 day playing guitar in front of sold-out stadiums and banging big breasted groupies. But I never learned to play guitar and the first chick I banged had mosquito bites for tits.

By the 90s MTV was starting to decline in quality but it was still good and watchable. Some MTV personalities became household names such as Pauly Shore ( “Encino Man” is good, fuck the haters! ) and Denis Leary, whom was feature in a string of the channel’s tv spots.

Leary’s fast talking rants were great and he quickly started to become really popular. He started to get acting gigs and also he had his comedy special “No Cure for Cancer” which is still one of my favorite comedy albums/ specials from the 1990s which featured this gem of a song

Leary showed up in some great early 90s movies like “Gunmen”, “The Sandlot” (great little coming-of-age story about boys and baseball for those of you who have not seen it), “Judgement Night” & the Stallone Classic “Demolition Man”. But the movie “The Ref” was his first starring vehicle and it was advertised as such.

Denis Leary plays a a cat burglar by the name of Gus who after home burglary gone wrong has to take a bickering, pain-in-the-ass couple hostage and things get complicated when the couple’s family show up for Christmas Eve dinner.

In recent times it has been revealed publicly what a low life, scumbucket Kevin Spacey was in his real life. Him being a queer was one of those “Hollywood’s worst kept secret” deals and I admit that I’ve been a fan of the guy and some of the stuff he has done throughout the course of his career,  I mean he was great in Netflix’s “House of Cards” for example. But the fact that he enjoyed his boyfriends to be of “Boy Scout age” have brought the once celebrated actor much deserved disgrace and infamy.

I know this can be difficult at times but sometimes one must block out everything one knows about the artist behind the role and just enjoy the film for what it is.  Spacey and the rest of the supporting cast are good in this film and the chemistry he has with Judy Davis who plays his wife in the movie is excellent.

“The Ref” was released in march of 1994 and it just did enough at the domestic box office to make back its budget. Test audiences did not like the original ending so a couple of months before it’s release a new ending was shot. The movie was directed by Ted Demme who was the nephew of Jonathan Demme. Ted Demme directed a few things that I like & I believe he could’ve gone to have a good career but unfortunately he liked the “Coco” and died from an overdose.

“The Ref” is a good Christmas movie starring Denis Leary whom in my view is a much better performer than some people give him credit for. 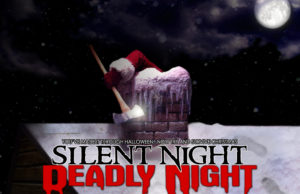 The 1980s were not only a great time for action movies but it was also a golden era for horror/slasher films. If movie fans feel compelled to watch a “Halloween” movie around October or October 31st or if you’re one of those that feels like one should watch a “Friday 13th” movie on a Friday the 13th, then why the fuck not watch this great slasher film around Christmas time?!

This christmas classic not written by Charles Dickens of course is about a young boy named Billy, who witnesses his parents murder on Christmas Eve. Then he is sent to an orphanage where he has to grow up under abusive nuns so naturally Billy as an adult has a psychotic break and dresses up like Santa and goes on a killing spree.

Originally the film’s title was “Slayride” & when I say it was a golden time for horror movies it sure was because on the very same day this horror/ slasher film was released on November 9 1984, the original “Nightmare on Elm Street” directed by Wes Craven was also released.

This film actually outgrossed “Nightmare on Elm Street” during its opening weekend, btw also in the top five that weekend , “The Terminator” … God I need a time machine!

“Silent Night Deadly Night” received such a backlash at the time due to TriStar pictures advertising featuring Santa Claus with an axe and parent groups were complaining that their pussy-future gay-children were scared by such an image and after much controversy the film was tragically pulled from theaters just a few weeks after it’s released.

But the film has developed a cult following over the years and it actually spawned a number of sequels.

There was part 2 in 1987, which most of the film consisted of footage from the first one

And a couple of more sequels ( that have nothing to do with the original ) and a sort of remake in 2008.

I love “Silent Night Deadly Night” and even though I don’t have children of my own I would like to give some of you parental advice. I will say that if your child is in kindergarten then he or she is old enough to watch this Christmas classic. 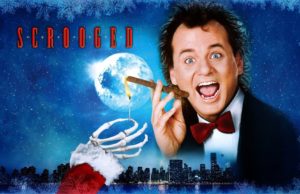 Now this is a christmas movie I try to watch every christmas season cause without it the holidays are just not the same. The movie is Bill Murray’s “Scrooged” from 1988.

“Scrooged” is a modernization of the Charles Dickens classic “A Christmas Carol”. Bill Murray plays Frank Cross who is the youngest TV network president in history and as we all know in the classic tale, the man is a jerk and 3 spirits will visit him on Christmas Eve and show him the past, present and future to show him the error of his ways.

After the massive success of “Ghostbusters” in 1984, Bill Murray did not do another movie in which he had a starring role in 4 years. Director Donner and Murray both admitted to not getting along that well during the making of this movie. But in my opinion & in many others, it did not hurt the film’s quality because the movie has become a Christmas classic in the hearts of many movie fans.

“Scrooged” was release on November 23rd 1988 & it went on to become the 13th highest grossing film of that year. To this very day,  it’s one of my favorite holiday films.

So there you have it folks, just a little list of christmas movies that men could watch without losing testosterone. I know there are others and feel free to comment below but I have to go and buy Christmas presents like toilet paper for my boss cause he’s an asshole and a vacuum cleaner for my girlfriend cause I’m a romantic.