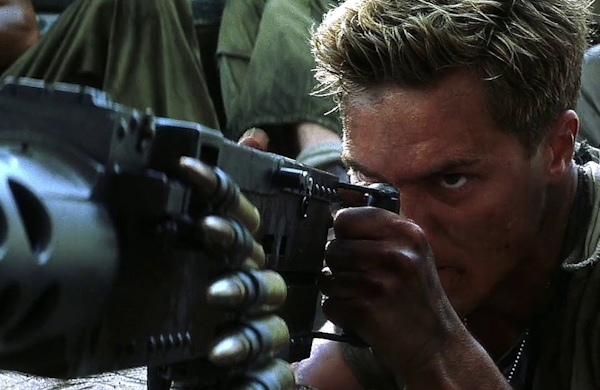 Runtime: 128 Mins
Rated: R
What To Expect: Probably the only version of this movie worth checking out

When the movie originally came out, the only people I knew who were talking about it were my girlfriend and her annoying yapping friends. Go figure. I watched it once or twice with the intention of never subjecting myself to it again. Then, I found out there was an R-Rated cut, but still I resisted. Not even this abomination could be saved by rough and bloody violence. It was only when I found out that somene took a hatchet to the R-Rated version that my interest returned. “Using the R-rated Director’s Cut as my basis, I have completely removed the awful romantic love triangle and thereby turned this into a kinetic war movie that focuses entirely on the lead-up and attack on Pearl Harbor, and the Doolittle Raid on Tokyo”. This is what the man who re-edited this particular version of ‘Pearl Harbor’ (2001) said about his cut. I gave it a ganders today…

The original movie had some nasty fucking demons about it. There’s only one thing worse than a romantic subplot. A love triangle subplot. Actually, there is something worse again – forcing one into a war movie, about Pearl Harbor no less. This shit was also the end of Michael Bay. He made some good things in the 90’s, but after this, no more, not until Secret Soldiers. So with this unofficial release, this mystery editor really had his work cut out for him. The first thing, as mentioned, the core of this cut is Rated-R. Is it the real deal? It looks that way, there are too many bloodsquibs and severed heads to make this a post conversion job. The attack on the harbor itself, before anything is re-edited at all, is one of more visceral consequence. Then there’s editing itself…

The original PG-13 sentimental sapfest went on for an excruciating 183 fucking minutes. For three hours unsuspecting viewers were subjected to an ambush of unrelenting melodrama, with two dude-bros (40’s style) fighting over some sheila. Here, the editor has been ruthless. He has terminated 60 full minutes. All that posin’, all that lovin’… gone. Vanished, no signs at all of it almost. It’s 90% seamless, you won’t notice it actually happening. This is now a battle movie. Maybe even too much of a battle movie, it’s like 15 minutes talking, 105 minutes breatheless Bay-ism action. Mind you, he’s comparatively easy with the cam shakiness here. But while this is the only version anyone should watch – if at all, it still suffers from Hartnett, Affleck and the DNA of something more… teeny. Something I suppose you wouldn’t notice as much were this a first-time viewing.

It’s just about watchable and no more, and that’s a remarkable turnaround from being insufferable shit. I guess I should put the disclaimer in too that this is non sanctioned and you really shouldn’t seek it out unless you already own the movie. Bad news though, Affleck still survives the Battle of Britain.