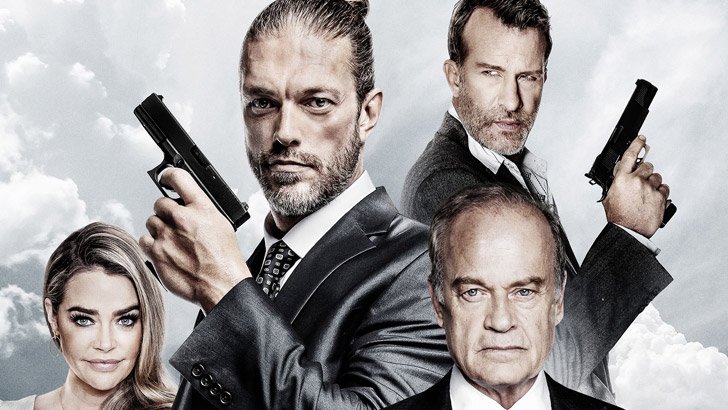 I have watched maybe 1-2 thousand films over the years, including possibly more VODmit than anyone has ever watched.  A lot of the latter has been torturous, gruesome stuff that often takes multiple sittings to finish, I have seen the worst of the worst including Ken Shamrock’s The Bunker.  Then I was subjected to this.  A film so accursed, so execrable that the only thing I can do is warn people to not even pursue it on a whim out of morbid curiosity – it will induce 7-10 days of depression on its victims.

The film sees gambler and thief Adam ‘Edge’ Copeland have his debt bought out by Kelsey Grammar, who threatens to murder him unless he and his crew of Z-list robbers board a flying casino and strip it of its cryptocurrency.  Funny that ex-Attitude Era mid carders (Ken Shamrock and Edge) have now been involved in the two worst screen atrocities ever committed, who’s next… Val Venis?  Anyway, things don’t go according to plan… for the bad guys.

After a botoxed Denise Richards (the protagonist’s wife) puts her kids to bed, Edge sets off to begin the heist.  Richards relays perhaps five lines of dialogue, after briefly standing in the kitchen, yet she’s on the poster of the movie, not that anyone would care – there’s cameo conning and then there’s ‘Money Plane’ cameo conning, with ex-F-listers.  Anyway, after Copeland boards the ‘plane’, my first inclination was that ‘Oh God, that thing is made out of hardened cardboard’.  The production values are the cheapest and nastiest ever put to screen, worse than even Escape Plan 2.

Throughout the film, lamentable ‘comedy’ is worsened by intrusive ‘humorous music’ (to remind you to laugh, y’see), which is broken up by the worst, laziest fight scenes ever seen in a movie.  The protagonist’s fight with a pilot shows that the director simply didn’t give a fuck, with punches not connecting and glaring errors in the sound editing.  Thomas Jane shows up in the movie, but is scarcely in it, neither is Kelsey Grammar.  They shoot their weapons as Sega Saturn-tier muzzle flash graphics appear on their overly simulated recoil actions.  Even an 11 year old would’ve asked them to do another take.

Were this a student project for YouTube, it would be downvoted into oblivion with pity upvotes not even offered, it’s that bad.