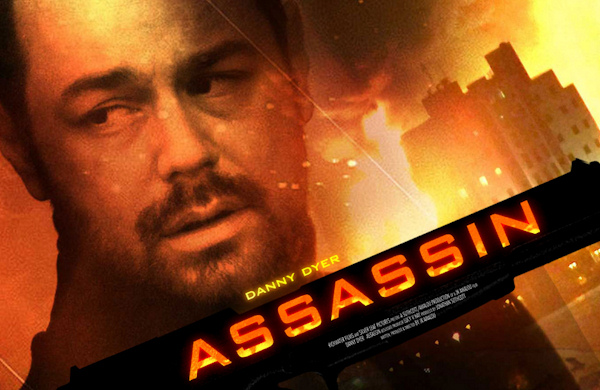 Last year I read an interview with Danny Dyer, he was talking about his movie career and its decline.  His language was a bit more ‘forthright’ than that (I’ve been making shit movies, bruv).  He said they’d call him up and he’d do movie after movie without even reading the script.  Dyer did indeed make one or two ‘okay’ movies back in the day, I think Outlaw (2007) – a movie with the single greatest movie commentary ever recorded – might have been the last fun Dyer movie.  So Dyer said his job selections from now on would be more careful and considered.  Not much care went into this one though.

So listen bruv, Danny Dyer, he’s a geezer of few words.  And in this movie he plays one of those assassin blokes, you know?  The type that’ll take care of unwanted problems.  I mean if you’ve got some bloody arsehole causing problems, you can send round the ‘Asssassin’ to take care of things, silent and smooth like, bruv.  So brothers Martin and Gary Kemp hire the ‘Assassin’ to whack a geezer who conned them on some business.  But along the way the Assassin falls for a slapper, who throws a spanner in the works.  These bloody tarts eh!  All the Assassin wanted to do was retire to the quiet life.

This is like a cheap Steven Seagal DTV.  And I mean just that, a cheaper version of those movies, which aren’t exactly powerhouses in production values.  Dyer at war with some shady characters while protecting a stripper.  The twists and narrative developments are so clichéd and lazy, you have seen this movie over and over and over before and always done better.  It plays it straight too, which can make a movie if the director is silently hiding some skills, but if he isn’t, it worsens everything.  Dyer is putting in what could be interpreted as a reasonable performance – by his standards.  But I think it’s the Kemp brothers who are wasted here.  They’re competent actors and because they’re real brothers, still have great screen presence.  Their scenes weren’t too bad, I wanted to see more of ’em.  Horrible writing for them though.

Also, speaking of Steven Seagal movies, in this movie the ‘Assassin’ is often on a motorbike, with his faced covered by a dark helmet.  Maybe I’m just too cynical, but I started getting suspicious if it wasn’t Dyer half the time we were actually seeing, and not some geezer from production, like the editor or something.  Isn’t Dyer shooting a regular TV series?  Oh, and this movie has quite possibly the worst soundtrack I’ve ever heard in any movie ever.

Related ItemsAll
← Previous Story “Story Of Your Life” Sees Renner Resist Alien Invasion
Next Story → Is This The Manliest DTV Commentary Ever Recorded?